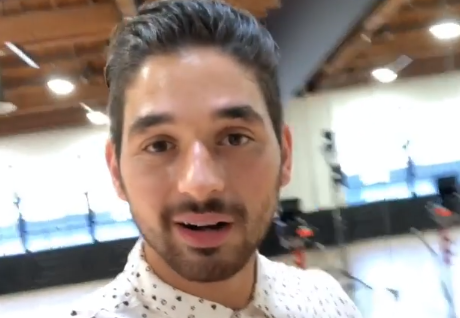 The new season of Dancing With The Stars is just a few short weeks away! Show execs recently confirmed a few new cast members. Now fans wonder who the competing couples will be. Reigning champion Alan Bersten recently posted an Instagram video moments before meeting his own partner, and fans are curious who it will be.

Our reigning champ is back and nervous excited! 😅 Take a guess at who @alanbersten might be dancing with this season. 👀 #DWTS

“Please don’t make me choose any of these 😩,” Alan’s co-star, Petra Murgatroyd commented.

Meeting my partner for season 29!!!! You know what that means??? Which entrance should I use this season @dancingabc 😂

Dancing With The Stars Features An Exciting Lineup So Far

Right now fans don’t yet know who Alan’s partner is, but we have some clues. Three more Dancing With The Stars celebrity guests were announced this week. That means the official list currently consists of Bachelorette Kaitlyn Bristowe, Backstreet Boy AJ McClean, Desperate Housewives‘s Jesse Metcalfe, NFL star Vernon Davis, and soap actress Anne Heche. Tiger King‘s Carole Baskin and actor Charlie Sheen may join the cast, but those are currently only rumors.

Many fans believe Kaitlyn Bristowe and Artem Chigvintsev will be paired together. During Season 21, they were supposed to compete together. Unfortunately, that didn’t happen and neither competed at all. Both Artem and his fiance, Nikki Bella, hope it will happen this time.

“I know Kaitlyn’s been announced as one of the contestants on the show and there’s a funny story behind it. She was just on the Total Bellas podcast and Nicole and her talked and they’re like, ‘Oh my god, this would be amazing if you could partner up with Artem.’ There’s been some conversation between them two and I’m just gonna say, hey, bring it on. If anybody would ask me who I would wanna be partnered with, I would say Kaitlyn,” Artem previously said after the pro dancers were announced.

That Narrows Down the Choices For Alan

So that potentially leaves Anne Heche for Alan Bersten. Anne is an award-winning former soap star, but she’s more famous for her high-profile romantic relationship with comedienne, Ellen DeGeneres.

Or, perhaps Carole Baskin really will join the show. She and Alan would definitely make an interesting pairing.

“Imagine if you lose to Carole Baskin,” Bristowe’s boyfriend, Justin Tartick, joked. Who knows? Carole Baskin may just be the next Dancing With The Stars champion.

DWTS executives also previously tossed around the idea of making a same-sex partnership, but that was never confirmed for Season 29. Most fans believe that would have been a huge talking point and we would have heard something by now. Hopefully, fans will receive answers soon. The Season 29 premiere date is September 14. That’s not far away at all!