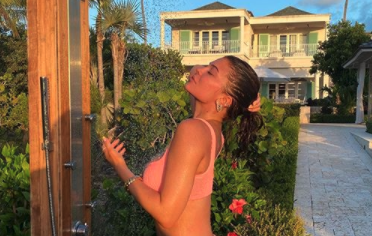 Kylie Jenner and Sofia Richie have been friends for a while. However, things may have started changing when Sofia and Scott Disick broke up

Sofia Richie recently celebrated her 22nd birthday. She had a party in Cabo San Lucas. However, one of her close friends, Kylie Jenner, decided not to attend. This is because of Scott Disick’s breakup from Sofia.

“Sofia and Kylie are still friends, but Kylie decided to stay back and not go on Sofia’s birthday trip to avoid any awkwardness,” a source said according to Us Weekly.

Of course, Kylie and Scott have always been and always will be very close as Scott is a family friend. However, it’s sad to see him come between Kylie and Sofia.

In true Kourtney Kardashian style, Us Weekly reports that she isn’t upset that Kylie and Sofia have remained friends.

“Kourtney isn’t upset by Kylie and Sofia’s friendship and wouldn’t tell Kylie what to do, but the Kardashians are extremely loyal to each other and Kylie felt she was better off staying behind,” the source reports.

Kylie should win sister of the year award. First, she lost Jordyn Woods when she cheated with Khloe Kardashian’s boyfriend. Now, it seems like she may be losing Sofia Richie to Scott Disick and Kourtney’s relationship.

But they said they were friends?

This all seems very strange considering they previously decided that they would remain friends despite the Scott Disick split. Perhaps things have changed with time, or maybe they will get back together eventually.

“They have a lot of friends in common and they’ve always had fun together,” a source had originally said. “Scott isn’t going to stand in the way of their friendship. Kylie and Sofia have a long history and a bond. Whether or not Sofia is dating Scott, she will be friends with Kylie.”

It seems like this may no longer be the case as they spend this time apart for now. There’s no telling how Sofia felt about Kylie skipping out on her party. Hopefully, she wasn’t too hurt by it. After all, she is going through a breakup.

Do you think Kylie Jenner and Sofia Richie should remain friends? Or, is it really too weird for them to ever return? Let us know what you think in the comments below. Come back to TV Shows Ace for more news on all of your favorite reality TV stars.