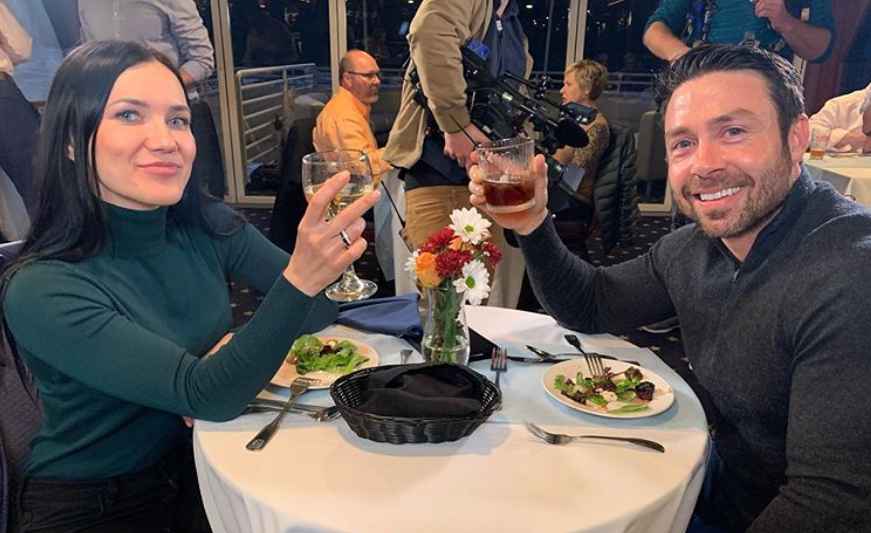 Geoffrey Paschel of 90 Day Fiance is the opposite of fan-favorite. In fact, most fans of the TLC reality show consider him “irrelevant.” This is for good reason after he stands accused of domestic abuse against a series of women, including his ex-wives. Besides this, currently, he is supposed to still be engaged to Varya Malina, which fans think is unlikely. However, in response to a comment on an Instagram post, Geoffrey explains why he is not with the Russian beauty right now.

Viewers first saw Geoffrey Paschel on 90 Day Fiance: Before the 90 Days. In the latest season, he traveled to Russia to meet his online love, Varya Malina. While he was in her home country to propose, she was hesitant after finding out about his criminal record. Geoffrey had admitted to spending time behind bars for selling drugs. When he finally did propose, Varya wanted more time and rejected his proposal. Paschel returned to Knoxville, Tennessee, apparently heartbroken.

Which couples are you excited to see? Who has the better chance on making it?

Geoffrey moved on with a friend-cum-girlfriend Mary Wallace. However, in the meantime, Varya had second thoughts. She tried to text Paschel to ask for another chance. When she received no response, Varya hopped on a plane and visited his Knoxville home, only to find Mary had taken her place. Long story short, after fights between Malina and Wallace, Geoffrey ended up proposing to Varya again. This time she said yes. According to the TLC storyline, he and Varya are still a thing, except she is back in Russia.

Since that time, several women have laid domestic violence charges against Geoffrey. Paschel did not appear on the 90 Day Fiance: Before the 90 Days Tell-All, reportedly because TLC fired him. Interesting to note, Varya stayed away from the online reunion out of support for Geoffrey. Geoffrey denies being fired by TLC and claims he is innocent of all domestic violence charges.

Once fans realized Varya isn’t in America with Geoffrey, they wondered if he was, in fact, with the Russian beauty. Possibly he had taken up with Mary again? Who knows?

Paschel took to Instagram recently with an image showing him cooking some food. The photo had a length caption, speaking about the importance of dedication. He writes, “Dedication: How do you know when you have arrived on the other side of a “life change?”

Paschel continues by saying life change comes from nowhere, after “engaging in repetitive behaviors” to attempt to achieve that desired change. He notes how easy it is to “veer off track and allow lines to be skewed” while out of your element or “pushed towards other options?” Geoffrey notes that no one is a “better accountability partner than yourself. The caption continues with notes about healthy eating and a recipe.

Dedication: How do you know when you have arrived on the other side of a “life change?” I think it comes out of nowhere after engaging in repetitive behaviors in attempts to achieve the desired change—even in the case of adversity. How easy is it to veer off track and allow lines to be skewed when you are out of your element or pushed towards other options? I have found that no one, and I mean no one, is a better accountability partner than yourself. Time and time again I have found myself being my sole driving force to change…change for the better. I create what many would consider unattainable goals just to see if I am up for the challenge. Even if I do not arrive at the goal, I leave the situation much improved. Some would say that this is solely driven by ego, but I say it is my effort to continuously advance. . I believe we should always task ourselves as a type of practice in self-control. It seems to make the harder decisions and stressful situations in life much more tolerable. Even when I am out of MY normal daily routine, I still felt the need to eat healthy and extend my desired healthy habits to others. Here is a brief look into one of my go-to dishes, whether at home or when traveling: -cook lean turkey or chicken (with your choice of spices) without oil and soak up all grease with paper towels as it forms. -add two handfuls of chopped vegetables and heat up slightly (you don’t want to cook out all of the nutrients). -add a binder, such as tomato paste, while heating up dish or your choice of hummus (after the fact). -serve over a bed of rice or spaghetti squash/zucchini “noodles”. -add a tablespoon or three of apple cider vinegar (I love it) to the bowl. -add copious amounts of super-hot peppers (with or without the seeds, depending on your palate—with for mine). Enjoy…with a glass or two of water, perhaps. . Does it seem, when you have a bit of pressure to act different according to your surroundings, that you give in and succumb to desires? Or do you hold steadfast to what you know is best for you?

Varya is not with Geoffrey right now

Soon after Paschel made the Instagram post, comments started flowing. One follower asked about his relationship status with Varya to which Geoffrey replies, “You know this because I am making a dinner???? My relationship status is not something I can talk about though regardless.” Others commented that if he isn’t with Varya, he has “seriously messed that up.” Geoffrey responds, saying “Yeah? Now I should let random people dictate my life? Too funny…”

While Geoffrey can’t state his relationship status, due to his NDA with TLC, he did give excuses why he isn’t with Varya right now. As noted by The Blast, he said travel restrictions are preventing him from being with her right now. Obviously, with the COVID-19 pandemic and a large number of infected people in the U.S., very few countries welcome Americans right now. Vice versa, very few foreigners would be happy or able to travel to the States.

No doubt, one day the truth will come out. In the meantime, 90 Day Fiance fans can follow the more active cast members!