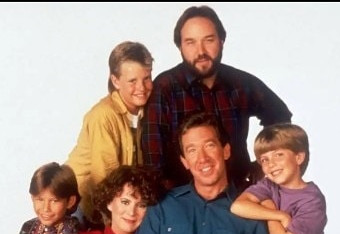 In the 1990s, ABC’s lineup included the Tim Allen-led Home Improvement. It was one of the networks most popular shows, airing for 8 seasons before cancellation in 1999. The show revolved around the Taylor family, with Tim Allen playing the dad role. Actress Patricia Richardson played his wife, Jill.

Tool Time also briefly featured Pamela Anderson. She was appearing on the ABC show and Baywatch at the same time for Home Improvement’s first two seasons.

Home Improvement had a long-running gag that viewers never saw the whole face of the family’s neighbor, Wilson (Earl Hindman.) The show went to great lengths to hide his face behind the fence.

The 80s and 90s are coming back with a vengeance! Alyssa Milano recently spilled the secret about a Who’s The Boss? reboot. Now Variety reports that Tim Allen has a project in the works with the History Channel. The voice of Buzz Lightyear in Toy Story will star in a competition series called Assembly Required.

His Home Improvement cohort, Richard Kern, will serve as the show’s host.

I've always admired people who repair something instead of replace it. So, I created a competition show with @HISTORY , and my old buddy @TheRichardKarn , to challenge the people who love to get stuff done! pic.twitter.com/EEVHKRPFum

Variety describes the series as, “sounding the call for those with a can-do attitude.” During the competition, contestants will, “take back their sense of purpose and awaken their inner builder.”

The show will premiere on the History Channel in 2021.

Tim Allen returned to his ABC roots in 2011 with the show Last Man Standing. The show ran for six seasons before it was canceled. Tim Allen and his fans were critical of ABC’s decision to cancel it, citing the network’s liberal politics. However, ABC contends the cancellation was due to low ratings.

Fox network gave the show a second chance. The gamble paid off, as Last Man Standing is one of their highest-rated shows.

Good news for Tim Allen fans! Fox is bringing Last Man Standing back for Season 3. Including its run on ABC, that will be the ninth season of the show overall. It’s unclear how big of a role actress Kaitlyn Dever will have on the Fox show. Her career has taken off in the last few years. She starred in the movie Booksmart and earned award nominations for her role in Netflix’s Unbelievable.

Will you be watching Tim Allen’s new show on the History Channel? Let us know your thoughts in the comments below. Be sure to follow us on social media for updates on your favorite shows.