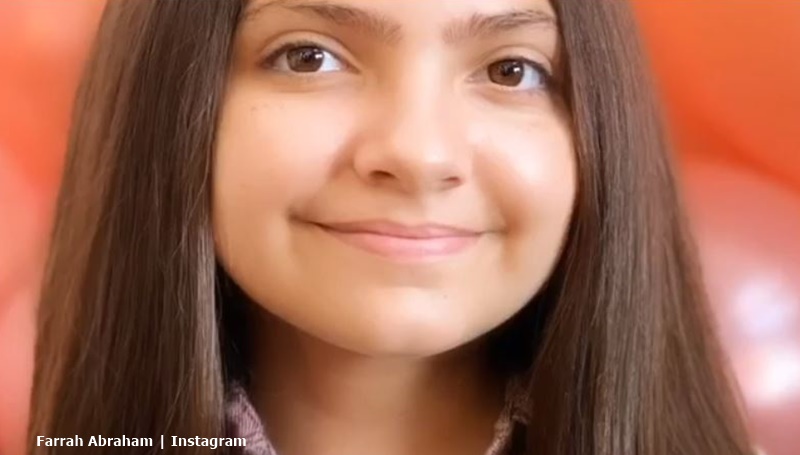 Farrah Abraham talked to her 11-year-old daughter Sophia about the birds and the bees. Fine! Many parents do that. But, not so many of them rush off and tell the media about it. Now, Sophia complained and told the Teen Mom alum to stop revealing her personal things.

Farrah Abraham talks openly about Sophia to the media

Sophia, now a pre-teen, probably feels a bit insecure as she goes through puberty. It’s a difficult time for young girls, and a mom who talks about her body to the media must make it all the more stressful. We reported that Sophia’s birds and the bees education made it to US Weekly. It’s awkward enough chatting with parents about that. But, imagine seeing it in the media? Poor Sophia.

It sounds like Farrah Abraham’s daughter took just about much of it as she can. Sounding angry and fed up with her mom, she slammed her for it. The Ashleys Reality Roundup wrote about Sophia when Farrah spoke to TMZ about her growing hair in her armpits. Farrah said, “Well, I mean she started having B.O. ya know, she started having armpit hair.”

Sophia embarrassed by her mom, hates her talking to the media

Sophia practically begged her mom to just stop revealing her personal things. It came on the ABRAHAM GALS podcast on August 16. Sophia grew angry because she believes the former MTV star doesn’t respect her privacy. Actually, she said that it really “embarrasses” her. It came when once again, Farrah raised the subject of her hairy armpits.

Farrah Abrahams asked Sophia, “Honey, are you gonna shave under your arms or no?” Angrily, Sophia asked why her mom always talks about that sort of thing. Referring to the TMZ article she said, ” Stop trying to expose me on TMZ! It’s really embarrassing!” Well, seemingly immune to Sophia’s criticism, Farrah just told her she did more embarrassing things “today.” Condescending, she told Sophia she acts “silly.”

It certainly seems that what her fans want from Farrah counts for more than Sophia’s feelings. She just told her daughter that people want to know about her “sprouting out hairs.” Disbelieving, Sophia feels “not one single person” apart from Farrah discusses their daughter’s armpit hair. Not deterred, Farrah still insisted that Sophia’s puberty should get publically addressed.

Absolutely fed up with it all, Sophia finally told her mom that she doesn’t respect her privacy. In fact, she added, “You are not good with the privacy.” Actually, Farrah seems remarkably loose with her own privacy and flaunts her body all over social media. How could she possibly respect Sophia when she doesn’t respect herself, critics might wonder.