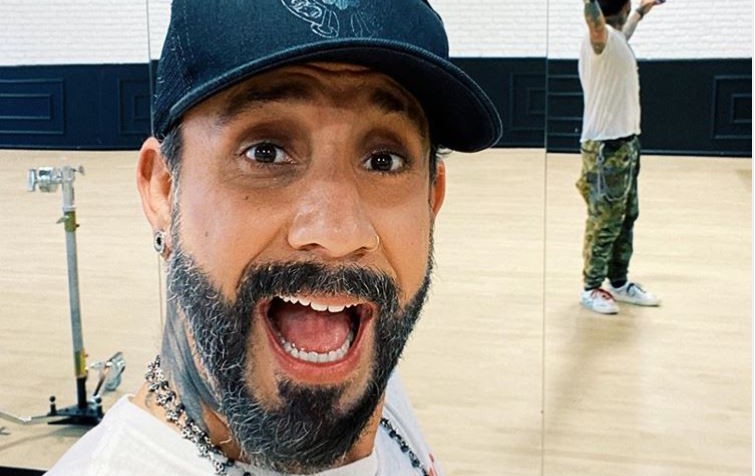 As fans anxiously await the big September 2 cast reveal for Dancing With the Stars, a few spots are being confirmed. One huge confirmation comes from Backstreet Boy AJ McLean. He hinted at joining the popular dance competition earlier in the week. Now, he has confirmed it. And, there are already hints and rumors about who he could be paired up with.

In his first post, AJ said, he was eating better and working out. In another post he thanked his trainer for helping him get back in shape. Then, today, AJ gave the confirmation fans have been anxiously awaiting.

He shared a photo of himself taking a selfie in the dance studio. He said, “We’re going for the mirrorball, baby!! I am so grateful to @dancingabc and @abcnetwork for the opportunity to be joining this season’s cast of #DWTS. I also want to thank my wife and my two girls for letting Daddy go on this new adventure. I’m doing it ALL for you! Get ready, BSB Army, this is going to be a wild ride. LET’S DO THIS!!!!!!”

Blood, sweat, tears. Rinse and Repeat. Thank you @bobbystrom for helping find my body and piece of mind again! This is an ongoing journey that I will never stop working on. Never felt better and more confident about my mind body and spirit as I do today. Thank you sir!

Partners have not been announced. In fact, the entire cast list will not be released until September 2. However, one pro dancer has hinted who her celebrity partner will be and fans think it’s AJ. Entertainment Tonight shared an interview with Cheryl Burke in which her hints sound like AJ could be her partner.

She said, “I was very, very happy. It’s somebody who I think will have lots of potential, but is also just a really cool person. I am going to have to spend a lot of time with this person, so you hope you just like them as a person first, and I definitely can check that box. I think he has some rhythm, so we will see. Ballroom is a whole other beast!”

Be your own kind of beautiful 🌈 Announcement coming soon!

Cheryl also said her partner is a perfectionist and she will probably have to tell him to chill and have fun. Plus, she did say he has been associate with someone on the show before. Remember, AJ was not the first Backstreet Boy to join the dance competition. Nick Carter competed and walked away with second place.

AJ actually said he reached out to Nick about DWTS. He said, “I reached out to Nick four days ago just to get some kind of insight on what to expect during the course of the season and he both supported me and terrified me a little bit. Just letting me know that schedule is gonna be rough, just hang in there, it’s a marathon not a sprint and I’m gonna do the best I can and hopefully take home that mirrorball.”

Good luck to AJ! He will be joining former Bachelorette Kaitlyn Bristowe as one of his competitors. DWTS will kick off September 14 on ABC.