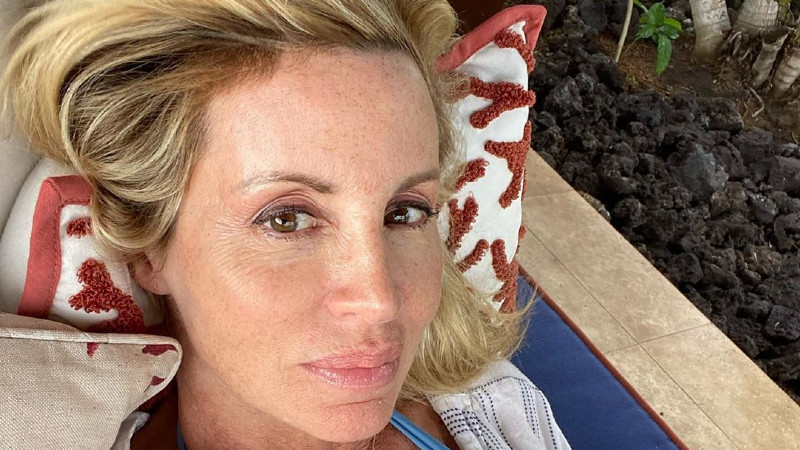 Fans of The Real Housewives of Beverly Hills were looking forward to seeing Camille Grammer back on this season;. The OG of BH left after Season 2, though she featured as a guest or friend of in several of the seasons since then.

Camille originally didn’t play into Season 10. However, rumors of a ‘boring’ season led the Bravo execs to bring in the cavalry. In addition to Camille, RHOBH alums Adrienne Maloof, Eileen Davidson and Kim Richards made appearances in the latest season. Brandi Glanville played a major part in the drama, as well, even though she wasn’t a full-time cast member.

As viewers know, much of RHOBH season 10 was about Brandi’s allegations of an affair with Denise Richards. Denise continues to deny the affair. But by the end of the season, none of the Housewives believed her.

During her appearance in Season 9, Camille tangled with Denise. Then at the Season 9 reunion, Camille had it out with the other women. So, none of them were on the best terms with Camille coming into Season 10. However, viewers saw in the finale that Camille and Denise met to discuss the situation with Brandi.

But the footage was shown very briefly, and in black-and-white flashback mode. Fans found that very confusing. So did Camille.

Camille Reveals She Had a ‘Heart-to-Heart’ With Denise

The conversation between Denise and Camille on Wednesday’s episode was brief. But it turns out they had a much longer and deeper conversation. Camille took to social media during and after the episode to live-tweet with fans. One fan expressed their disappointment over the short scene.

The fan wrote that they had been looking forward to Camille’s appearance “all week.” Camille responded that she had a heartfelt chat with her former nemesis. The RHOBH alum also basically said ‘it is what it is’ when it comes to what the producers air.

Instagram fan accounts @queensofbravo snagged a screengrab of the exchange between Camille and the fan.

Camille isn’t the only one questioning what Bravo shows. Brandi Glanville told followers she has “2 years” worth of texts between her and Denise. But she has no control over what the producers choose to air.

RHOBH fans generally think the producers have been extra manipulative this season. During Wednesday’s episode, one producer tried to rev up Garcelle Beauvais against Denise.

It wasn’t a short scene, either. And Camille noticed. One fan tweeted a gif of a bored expression with the caption “Learning Rhinna’s [sic] wig names.” Camille saw the tweet and had something to say about it.

The former RHOBH star seemingly agreed with the bored fan. She wrote in reply that it was “wasted airtime.”

That didn’t need to be aired. Had nothing to do with the storyline. Wasted airtime IMO

Camille was still salty the day after the season finale. She tweeted on Thursday morning that the network should change the name of the show. It seems that none of the RHOBH stars actually live in Beverly Hills.

So most of the cast now lives in Encino? They need to change the name of the show to “The Real Housewives of the Valley” https://t.co/wE4qy66yYT

Camille Grammer has had a busy summer. She spent a lot of time flying back and forth between Boston. Her daughter, Mason, is attending college there. BravoTV reports that Camille helped Mason decorate her dorm room. The outlet notes that Camille didn’t specify which Boston college her daughter is attending.

Mason is one of two children that Camille shares with ex-husband Kelsey Grammer. The former couple also has a son, Jude.

Tell us in the comments – were you disappointed in Camille’s short appearance?

Season 10 of The Real Housewives of Beverly Hills isn’t completely over yet. The three-part reunion starts next Wednesday, September 2nd. Brandi Glanville also has a one-on-one interview with Andy Cohen that will air at some point.

Follow us on social media for all the latest television news.