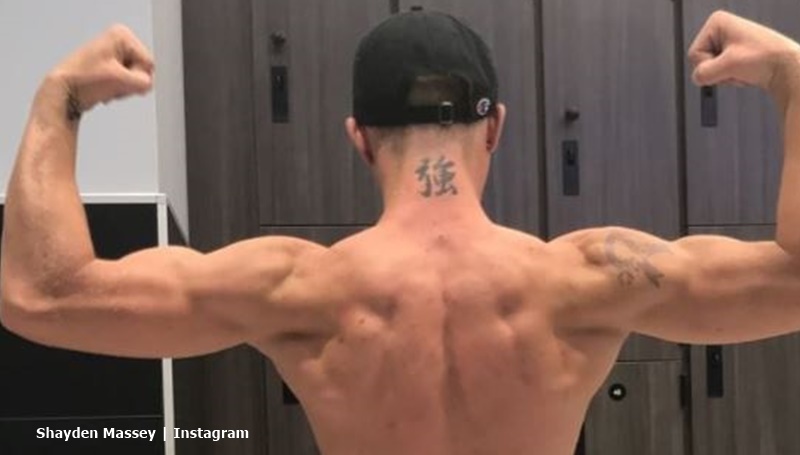 Unexpected dad, Shayden Massey took some heat from TLC fans in July. It came when he shared a photo of himself with a new marijuana tattoo. But, his followers can’t complain about the way he keeps himself in shape. In fact these days, he flaunts a ripped physique.

Shayden and Lexus went through problems in Season 2 of the TLC show. But, we reported that they stayed together after the birth of their daughter Scarlett. Nevertheless, it all came to an end and he moved on with someone else. Actually, he now expects a baby by another woman. Back when he starred for the first time, fans saw a rather good-looking young man. But, he looked tall and a bit skinny rather than well-built.

Perhaps he got some motivation from his fellow Unexpected castmate Max Schenzel. Max, often in trouble with the law, also works out a lot. He’s getting some impressive abs these days. When he moved into a sober house, Max seemed excited about the gym equipment there. Whatever his motivation, Shayden’s training dedication certainly looks like it’s paying off.

Over in his Instagram, Shayden often shares photos of himself working out and the impressive results. In one recent video, he explained, “Got my 54 inches down, now just to master my 57.” He shows himself easily jumping on top of a pile of measured foam units. Very impressed, one fan noted, “Awesome! Your dedication rocks👍✌ That looks fun but I bet its not easy, the balance has to be spot on, too!”

In another post by the Unexpected baby daddy, he revealed the massive muscles in his arms. One fan wrote, “Big gains💪Looking good!” Certainly, he looks amazing and shows no signs of stopping any time soon.  But, dedication’s the key and sometimes it hurts a lot. In another post. Shayden shared, “Will definitely feel today tomorrow💪.”

Some fans wonder about Shayden’s dedication

Some fans admire Shayden because he shows some serious dedication to building up his fitness levels. In one video he carried out multiple leg-ups that showed his tight, flat tummy area. As one admiring fan noted, that takes loads of dedication. They commented, “Those abs are chiseled AF! Good job, that is what dedication looks like folks👍✌.”

Another video earlier this month really showed that gaining involves pain sometimes. Some Unexpected fans thought him crazy, as someone repeatedly punched him in the solar plexus. One person commented, “What’s the f–king point of thaaaat 😂.”

Shayden replied, “Lol y’all should start doing research on stuff before you talk, lmao I got people in my comments that have never been in a gym telling me how to get abs.”

What do you think of Shayden Massey working so hard that he now flaunts a ripped physique? Sound off in the comments below.

Adam Busby Gets Crash Course In Water Safety: Are The Quints OK?!
Danielle Sends Adam To Clean Busby Bus, Won’t Travel In Dirty Vehicle
‘General Hospital’ Spoilers, August 2-6, 2021: What Is Austin Up To?
‘Below Deck Med’: Do Malia White David Pascoe Hook Up In Season 6?
Hallmark’s Fall Harvest 2021 Titles Will Lead To Countdown To Christmas