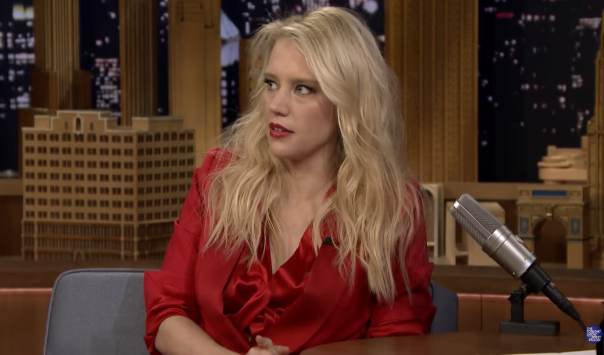 Have you heard of the Tiger King series coming soon? Right now, the project is called Joe Exotic and comedienne Kate McKinnon will portray the infamous Carole Baskin. McKinnon will also be one of the show’s executive producers. This new creation is based on the Wondery podcast called, Joe Exotic. Viewers will see McKinnon and the rest of the cast act out true events.

“She sets out to shut down his venture, inciting a quickly escalating rivalry. But Carole has a checkered past of her own and when the claws come out, Joe will stop at nothing to expose what he sees as her hypocrisy. The results prove dangerous,” an official press release reads.

We don’t know much more about the rest of the cast yet, but Kevin Bacon says he really wants to play Joe Exotic himself. That would certainly be an interesting casting choice.

Kate McKinnon is famous for her roles on Saturday Night Live, Office Christmas Party, and the Ghostbusters reboot. Are you excited to see how she portrays Carole Baskin? Let us know in the comments.

What’s the Real Carole Baskin up to These Days?

There are rumors that Carole Baskin is in talks to appear in the upcoming season of Dancing With The Stars. The new season is scheduled to air on September 14, and rumor has it that the show is having trouble finding celebrity guests willing to compete. Carole Baskin seems like a strange choice, but according to E! News there is an even stranger choice. DWTS execs apparently asked Dr. Anthony Fauci to appear on the show, but he declined. Perhaps he will compete another year when there isn’t a global pandemic.

Carole Baskin also gained control of Joe Exotic’s zoo this summer, so that is another interesting development. We can’t wait to see how they bring this story to life.

But What Happened to Her Late Husband?

If you watched Tiger King, you know Carole Baskin’s second husband disappeared under incredibly mysterious circumstances. His family wants answers and is reportedly offering a reward for information.

These billboards are currently up around the Tampa area:

Do you think they will include anything about his disappearance on the new show? Only time will tell. However, this is a significant piece of Carole Baskin’s history, so it doesn’t seem like they would leave it out.

Will you tune in to the new Joe Exotic series when it airs? PEOPLE says it will be available on NBC, USA, and Peacock when it finally airs. Who would you like to see fill out the cast? Leave your thoughts in the comments.

Mady Gosselin Defends Risqué Photo: ‘I’ll Do Whatever I Want’
‘The Young and the Restless’ Spoilers, August 2-6: Phyllis Gets Everything She Needs
Netflix Original Series ‘Echoes’ From The Man Behind ’13 Reasons Why’
‘Bold And The Beautiful’ Wedding SHOCKER Sheila Tells Finn ‘I’m Your Mother’
Artem Chigvintsev And Nikki Bella Celebrate Their Son’s First Birthday