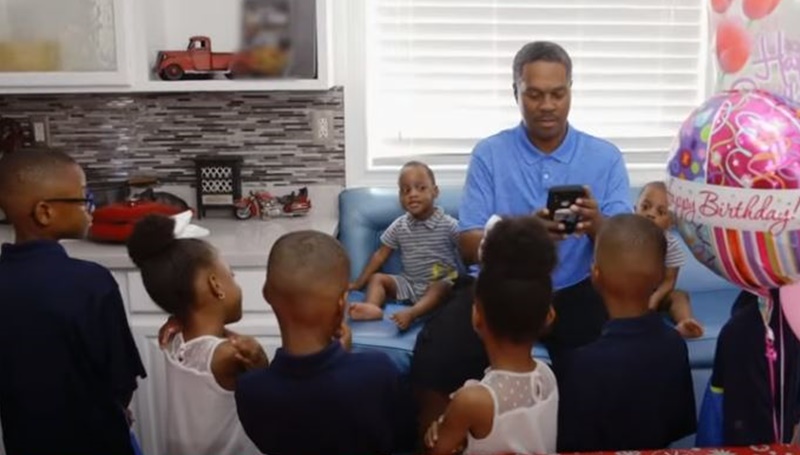 Doubling Down with the Derricos fans saw that Karen just gave birth to triplets. Actually, that brings the number of kids to 14. And, 14 kids seems like an incredible number of children. Now, Karen and Deon talked about getting a nanny in. Notably, fans discussed how that might freak out applicants for the job.

In the previous episode, Karen birthed her latest triplets. In fact, the mother of multiple multiples went into early labor after an earthquake. Unfortunately, one of the kids, Dawsyn got diagnosed with a hole in the heart. So, she’s back and forth to be with the newborn after heart surgery. Fans saw that Deon’s mom, Grandma GG helped out she of the birth. But, she returned home.

People noted that Deon spoke about GG. He said, “My mother was here to help us with the children, but she had to go back home to Detriot.” With her gone, the realization that 14 kids take up more hours than they can cope with, meant discussing a nanny. But, Karen worries people might judge her for it. The Doubling Down with the Derricos mom said, “I feel like me having a nanny is telling them, ‘Mommy can’t do this all by myself.”

TLC fans fell in love with the Derrico family. On Twitter, they talked about them getting in a nanny. For a start, they don’t condemn Karen for needing some help. Most people compliment them on their parenting skills. One fan wrote, “Karen, Get a Nanny and you’ll be more of a super mom if that even exists cuz you are already a super-super-super mom. Spoil yourself. @TLC please help #DoublingDownWithTheDerricos with a few Nannies. Thanks.”

Other fans discussed the potentially funny side of any upcoming interviews with nannys. One fan commented, “I can’t wait to see these nanny interviews once she tells the applicant she has 14 children!” But others think that any nanny for the Doubling Down with the Derricos family might find it an easier task than imagined.

A follower noted, “even tho Im a mom n I can’t stand bad ass kids, I think I could babysit all 14 of the Deerico’s kids, they don’t seem like they’d be a handful when their parents aren’t around.”

14 kids and we haven’t seen a temper tantrum or attitude yet! This is how you parent #DoublingDownWithTheDerricos pic.twitter.com/ColKxcK96U

Actually, loads of fans commented on the well-behaved kids. Notably, one said, “they cleaning up after themselves…at a space, they paid for…all you duggars…and them 8’ers…y’all triflin AF.”

What do you think about Karen and Deon of Doubling Down with the Derricos getting in a nanny? Can you imagine the interviews? Do you think Karen should stop feeling guilty?  Sound off in the comments below.