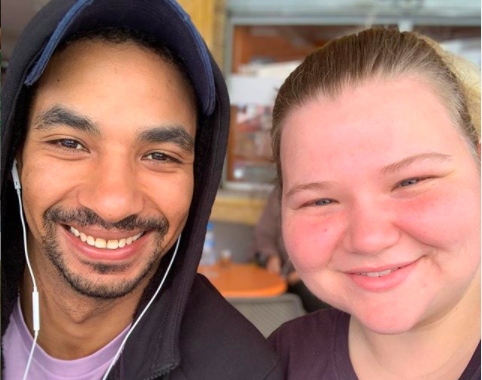 90 Day Fiancé‘s Nicole Nafziger shut down rumors that her fiancé, Azan Tefou, had a wife before the pair met. She claims there is proof Azan was single.

Does Azan have a first wife?

Fans started calling out Nicole right after she returned to the States following her extended visit to Morocco. According to InTouch Weekly, one fan got straight to the point saying, “All we wanna know is who is Azan’s wife?”

The 90 Day Fiancé alum could not ignore the comments any longer and chose to set the record straight. She attempted to shut down the speculations commenting back that Azan does not have a wife.

Nicole elaborated saying, “If he was married at 19, then why didn’t it say that on his papers when we were doing the K-1 [visa]? You have to have a paper that says you’ve never been married. I saw that paper because I put the packet together. Therefore he doesn’t have a first wife.”

Her attempts did not appear to work as fans kept on pushing the topic. The skeptical fans even took another turn and started questioning who Nicole was engaged to.

The 90 Day Fiancé star’s Instagram bio says she is engaged to “H.” Fans took off with this piece of information. They questioned Nicole about whose name began with the letter “H.”

Once again Nicole stepped in to clarify that Azan’s real name is Hassan M’ Raouni, so the “H” is Azan. He simply chose to use the name Azan instead on their very first season of 90 Day Fiancé and it stuck.

Nicole cannot seem to catch a break with her fans. Most recently she finally returned from what was supposed to be a much shorter trip to visit Azan in Morocco. However, due to the coronavirus travel bans, she did not return to the United States until August 10. Nicole had been in the country since March. Thousands of people slammed her on social media for even going there in the first place since she left at the beginning of the pandemic. Additionally, several accused her of abandoning her daughter May by leaving.

As soon as the 90 Day Fiance star arrived back in the States she posted a video with her daughter May. But this turned on her right away with many fans slamming Nicole for not self-quaratining upon her return to the United States.

What do you think of Nicole’s defending Azan? Let us know what you think in the comments below. Be sure to watch new episodes of 90 Day Fiance: Happily Ever After airs Sunday nights at 8 p.m. ET on TLC.