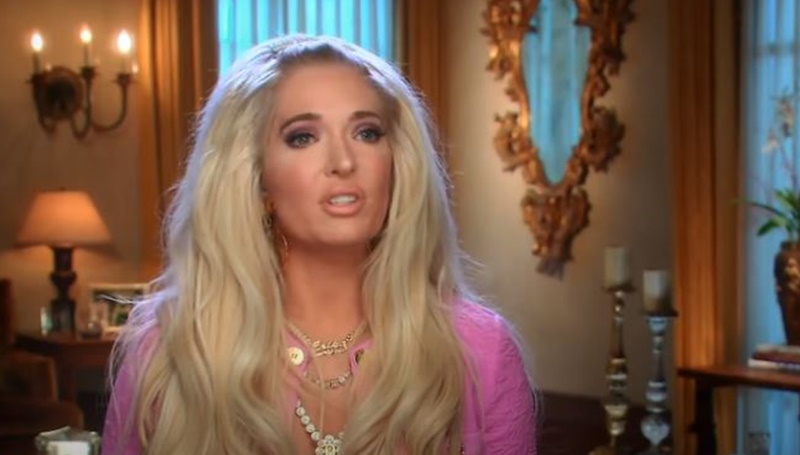 RHOBH star Erika Jayne got the attention of her fans in mid-August with a stunning photo. Somehow, she managed to look gorgeous just wearing a bathrobe. And now, she stunned her Real Housewives of Beverly Hills fans again. This time, she wore a sunny yellow swimsuit.

We reported in mid-August, that Erika Jayne blew her Real Housewives of Beverley Hills fans away with a stunning photo. She captioned it with “golden.” As usual, she snapped the photo while sitting at her makeup station. In the photo which revealed her fake eyelashes and deep bronzer, she “literally” glowed.

Now, the RHOBH star wowed her fans with another amazing photo. This time, she looked radiant and sunny in a bright yellow sequined bathing suit. As usual, she got that direct stare at the camera just perfect. Looking sultry, the yellow beautifully offset her long white-blonde har against the wooden paneling behind her.

The Bravo star captioned her post with “Hey Monday ☀️.” Dorit Kemsley responded with, “Hi gorgeous!” For a Monday, she sure impressed a lot of people. One fan said to her, “Monday has never looked this good🔥.” Another impressed fan noted, “So very Pretty! And natural beauty, at that ❤️.” Actually, sharing her lovely photo made some people feel a whole lot better about Monday. One fan wrote, “Monday is definitely on to a good start now.”

Some of the RHOBH star’s 2.1 million followers wished they could look like her. One of them said they just wished they could actually “be her.” It’s no wonder that nearly 100k people loved the photo in a matter of hours. On the day before, Erika’s Sunday photo revealed her in an outfit that simply looked like black waves. Lisa Rinna, no stranger to nice outfits, commented on that one. She said, “Giving the people what they want!!!! ✨✨✨.”

Once again, Dorit Kemsley stepped in and commented as well. She said, “She’s our girl!” As one fan noted, “Seriously I rarely fan girl out but you give so much every time. I am always amazed!” The singer, actress, and television personality’s husband Tom Girardi‘s a lucky man, many RHOBH fans agree. Between them, they have more than a few pennies in the bank. So, it might be argued that anyone could look good with her wealth. But, for many fans, they think her natural beauty shines through.

Erika obviously had some work done on her, but who doesn’t these days? She seldom discusses that, but clearly, she looks after her assets very carefully. What did you think of Erika Jayne’s Monday outfit? Did it brighten your day? Sound off in the comments below.