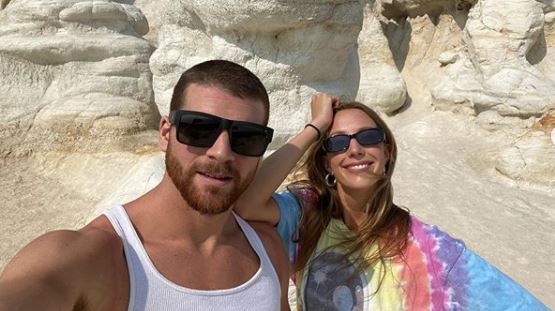 If you are looking for a Love Island update, you are in the right place. Cashel Barnett has moved on from Kyra Green and has a new girl in his life. He wasn’t revealing her name at first, but TV Shows Ace has information on who the girl is that has won him over. It looks like Cash has found love.

Cashel Barnett shared his girlfriend on his Instagram a few times. So who is the new girl in his life? Well, her name is Alexandra Karacozoff. It looks like she goes by Ally sometimes according to her Instagram handle. She is gorgeous and Cash is already really into her from his posts. This picture of her below shows some of her beauty. Cash didn’t meet her on Love Island, though. No word yet on how the two started dating, but it is long distance.

She has shared pictures that you can tell she is the same place as Cash. She also shared a few videos of them singing together. It really looks like this couple has a lot in common and gets along great. Check out this video below of the two of them. There is nothing wrong with her being a bit like Phoebe from Friends.

Leaning into the fact that I’m Phoebe Buffay

The video above was from clear back in April. This shows that they have been spending time together a lot. She also posted him in March. For some reason, Cash didn’t share about her until a bit more recently. Maybe he wanted to make sure it was going to last before getting the entire world involved.

Season 2 of Love Island started last night. This season airs every night on CBS except for Saturday and Sunday. On last night’s episode, fans got to meet the new singles who are trying to find love this time around. They were all put into couples, but there is one single guy in the house right now. Someone will be going home soon. It will be interesting to see who all couples up and lasts on this season of Love Island USA.

Don’t miss new episodes of Love Island on weekdays on CBS. You do not want to miss any of the drama this season. You can’t expect to see Cashel back again, but it would be interesting if they brought in someone else from last season’s cast to see if they can find love.