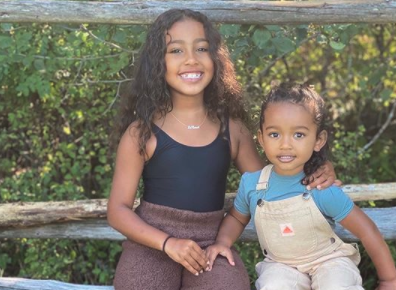 Kim Kardashian’s daughters are trying out their hand at photoshoots, however, it doesn’t look like this one went too well! The Keeping up with the Kardashians star showed a photo of both girls on the ground.

North and Chicago do a photoshoot

Kim Kardashian is adding a bit of light to Instagram feeds today. She shared a photo of her two daughters sitting up on a fence. Apparenlty, they told their mom they wanted to do a photoshoot, so of course, she helped out.

“My girls wanted to do a photoshoot together sitting up on this rail. Swipe to the right to see how it ended 🤣🤠🥰,” she wrote on the post.

The first photo looks great. The two girls are sitting on the fence and they look absolutely adorable. However, as you slide through the photos they get sillier and sillier. Finally, the last photo shows what seems to be North running away while Chicago is face-first in the grass. Fans can only imagine what took place to get them there.

People in the comments were very supportive of the girls and their modeling career on the fence.

“Supermodels in the making ! ❤️” one person wrote.

“Cutest 💫,” someone else added.

Hopefully, Kim will keep sharing photos of her adorable children. Everyone can use a bit of light on their Instagram feeds, especially right now.

Despite the cute photos on Instagram, Kim Kardashian seems like she must be going through a lot with Kanye West. It’s no secret he has been trying to run for president. That has caused a lot of ups and downs for the family. However, they did just go on a family vacation. Apparently, Kanye suggested it because he knew times were tough and wanted to have fun with the family. Kim agreed because sources say she will do anything to save her family.

After they returned though, Kanye went back to Wyoming instead of living in LA with the family. That hasn’t stopped him from visiting though. Apparenlty he missed the children so he has been in LA visiting them. Honestly, there’s no telling what is going on with the family. Hopefully, though they are able to work through it.

Do you think Kim Kardashian and Kanye West will stay together? Or, are they better off apart? Let us know what you think in the comments below. Come back to TV Shows Ace for more news on all of your favorite reality TV stars.