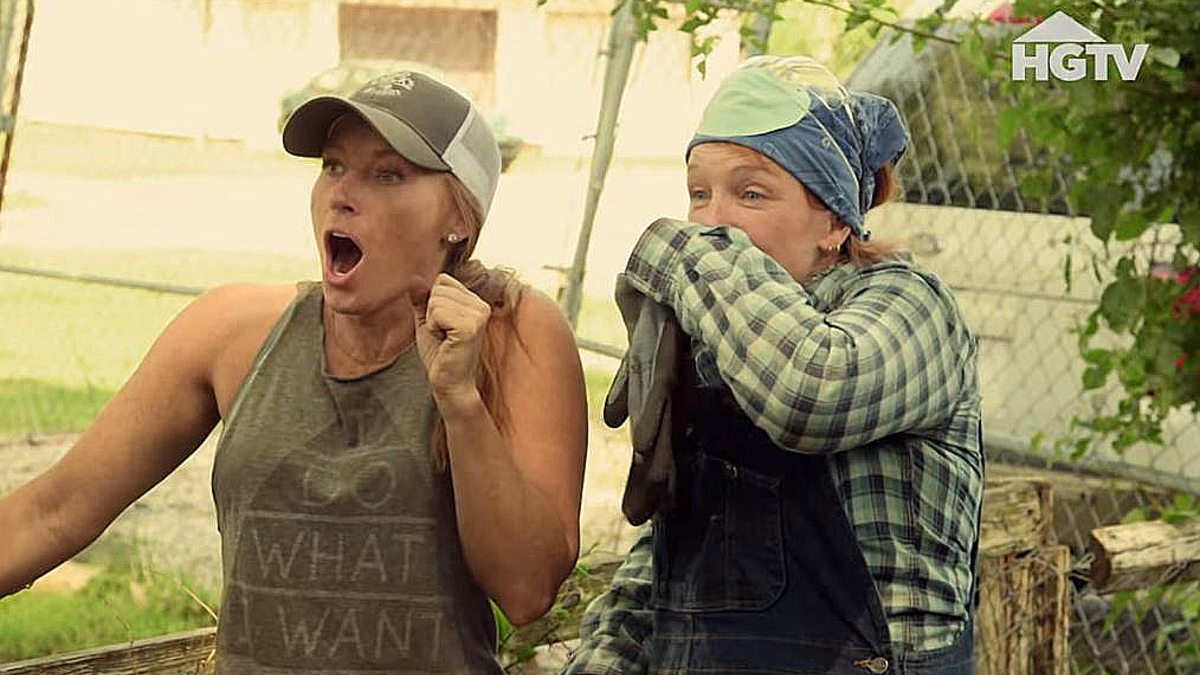 In tonight’s episode of Good Bones, Mina and Karen take on a project close to their heart. But wait until you see the sizzle reel below as their kin, brother Tad is introduced to the Good Bones HGTV set.

Think a human tornado or a whirling dervish, as Tad Starsiak is a one man wrecking crew it appears. Mina and Karen are related by blood so they see all the good in Tad as they renovate a home for him.

Their goal? To bring him out of his college-esque living habits. Tad, Karen’s son and Mina’s brother, shows us his behaviors as he breaks mirrors, knocks over brick chimneys and generally does the demo style most contractors have to insure themselves for to the maximum because of workplace accidents.

Ted is known for his wild antics on demo day, he takes it seriously.

Now fans can look forward to more of him as he is now part of the family business as Assistant Project Manager of Two Chicks and a Hammer.

Our team of Mina and Karen look to turn an old garage on one of their rental properties into a tiny home for Mina’s brother, Tad.

Seeing how Tad is wired, the two deal with vexing foundation issues and a mysterious broken pipe. This tiny home has very large issues that must be resolved before Tad can move in and hopefully not accidentally “demo” his own domicile.

In the below clip, Mina and Karen talk about Tad’s wily ways and love for life and immaturity as they explain their reasoning for setting him up in his own small space to help him manage himself better.

HGTV’s Good Bones is a popular reno series that transforms “diamonds in the rough into sparkling gems” according to the network.

Like so many other shows on HGTV and DIY network, the series has an angle, and it highlights a team of related renovators who make it their business to turn run-down properties into dream homes.

This series features a mother and daughter team—Karen E. Laine and Mina Starsiak—as they renovate houses in the Indianapolis metro area.

Now brother Tad is introduced in the mix.

HGTV says that the “unique spin” on their renovation show is that Laine brings business savvy and financial knowledge to the partnership thanks to her law background. Daughter Starsiak is a real estate agent.

Together they formed Two Chicks and a Hammer before landing a show on HGTV.

Tune in tonight to see Tad work his demo magic: