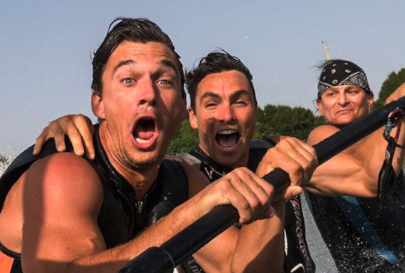 Tyler Cameron and Hannah Brown have a rich history from The Bachelorette. Now, Tyler is remembering those times on his new Youtube series.

Tyler is posting a Youtube video on his new channel all the time. The channel exists so he can tell his story and not just be a guy who fell in love on reality TV. Of course, The Bachelorette still comes up often. In fact, he’s even making a series where he rates his season of The Bachelorette. This time, Tyler is talking about when he first met Hannah Brown, US Weekly says.

Apparently, when he first gets out of the limo, he forgets everything he was saying to Hannah. Tyler says that he rehearsed what he would say to Hannah over and over again. However, once it was time he blacked out.

Tyler starts telling his story. “[When] I see her, I basically black out,” he explained. “I freak out [with all] the lights, the cameras. I’ve been, like, watching everyone else go all four times before me. I’m like, ‘Oh, I got this. I got this. Then I get out of the limo and I black out. I don’t even know what I’m saying. I’m talking out of the side of my neck,” Tyler revealed of that night.

Tyler had to go last

Unfortunately, he had to go last when it came to getting out of the limo. So despite being ready to go at 5 pm, he had to wait until 11:30 pm to actually meet The Bachelorette. No wonder he forgot what he was going to say!

That night was probably crazy for Tyler. However, he did make it pretty far in the show so he must have made a good impression on Hannah. They didn’t work out, but their romance was definitely one to follow throughout the season. Sometimes, it still seems like there could be something there. Apparently they’ve even talked about what it would be like if they were engaged.

Did you like Tyler Cameron on The Bachelorette? Let us know what you think in the comments below. Come back to TV Shows Ace for more news on your favorite Bachelor Nation stars.