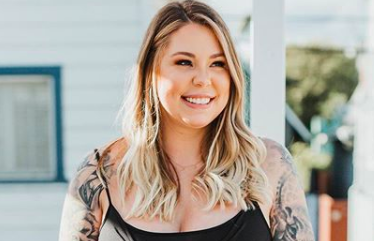 Teen Mom 2‘s Kailyn Lowry is back at it again on Instagram! She shut down yet another hater on Instagram bashing her for being a single mom of four.

Teen Mom‘s Kailyn is no longer messing around with the trolls. This time she posted a screenshot of a direct message and captioned it, “Why do y’all do this?”

According to US Weekly, the direct message said, “You’re a f—king single mom with four kids and you’re on TV. … You’re supposed to be stopping pregnancy of the younger generation, yet you went on to have four f—king kids with deadbeat dads that don’t want to be there for you. … I used to like you, but now I’m just ashamed of you.”

Kailyn has been fighting off a lot of backlash from online trolls ever since the birth of her latest son.

Just last week the negative comments were piling up on her Instagram post featuring her newly made family of five.

One internet troll commented, “Poor babies, 4 men, but not one father. #birthcontrol.” But, Kailyn’s true fans were quick to defend her.

They shut down that negativity by spreading their own positivity. One fan told a troll to, “Get a d*m life Karen.” While another roasted a hater saying, “4 kids. 3 dads. 0 of your business.”

Kailyn finally felt compelled to reply herself saying, “Right! Just because I’m not with their dads doesn’t mean they’re not present. People are weird.”

Unfortunately, the negative comments shaming Kailyn for being a single mother of four children never seem to stop coming. Just click on any of her posts since her new son arrived and there are plenty to pick from.

The Teen Mom star’s new son and the drama

The reality star gave birth to her youngest son, Creed, at the end of July. This is Kailyn’s second child with Chris Lopez.

She first revealed her son’s name on August 10 posting a photo of her son featuring his new baby blanket. This image revealed to the world that his name was Creed. However, fans could not resist commenting jokes about how she came up with Creed. The comments became so much that Kailyn replied to set things straight.

Additionally, Kailyn made the bold choice of giving baby Creed his father’s last name. On the August 13 episode of her podcast “Coffee Convos” she revealed that she gave her son the last name of Lopez.

What do you think of all the mom-shaming Kailyn is receiving? Let us know what you think in the comments below. Be sure to watch new episodes of Teen Mom 2 on MTV.