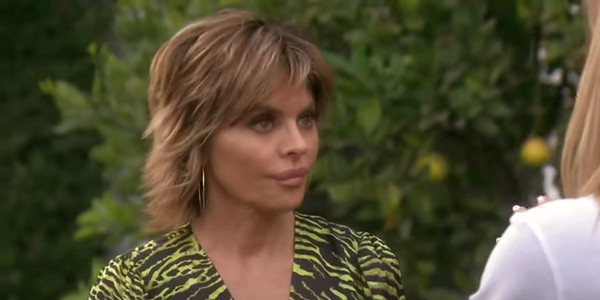 Lisa Vanderpump may be the queen of Bravo, but Lisa Rinna is the queen of shade. The Real Housewives of Beverly Hills star took to her Instagram over the weekend to share several cryptic quotes. Many fans took the quotes as jabs at Lisa’s former friend Denise Richards.

Prior to Season 10 of RHOBH, Lisa and Denise had been friendly for over 20 years. That seemingly changes before the season ends. Viewers saw the beginning of the end of their friendship play out over the last few episodes.

As fans know, much of Season 10 focuses on Brandi Glanville’s allegation that she had an affair with RHOBH’s Denise Richards. Kyle Richards and Teddi Mellencamp confronted Denise with the claims during the cast trip to Rome. Lisa Rinna continued to question Denise about the allegations instead of sticking up for her supposed friend.

After Denise told the Days of Our Lives alum how her behavior hurt, Lisa Rinna apologized. She vowed to be a “better friend.” However, in the very next episode, Lisa sided with Brandi over Denise again.

To make matters worse, Lisa then went to Kyle’s house to express her concerns. She starts to wonder if Denise is playing her for a fool.

Is Lisa Playing ‘The Role of the Fool’ on RHOBH?

Lisa Rinna made it clear in the last episode of RHOBH that she thinks Denise is manipulating her. The actress took to Instagram to share several shady posts that could be referencing Denise.

One of the posts is about pretending to be a fool to trick the fool. The image read, “Sometimes you have to play the role of the fool” to fool the fool.

The post to Lisa’s Instagram Stories followed one that cautioned against “losing the best years of your life” to a “toxic person.” Underneath the quote, Lisa wrote, “Done and done.”

From what fans have heard about the RHOBH Season 10 reunion taping, Lisa and Denise’s friendship is done. The word on the gossip blogs is that Lisa came hard for Denise at the reunion about her alleged manipulations.

Another meme the RHOBH star shared to her IG Stories is one she took from model Cindy Crawford. The image jokes about someone advising you not to cut people out of your life. The suggested response to that is, “snippity snip, motherf**kers.!”

It seems that Lisa has snipped her RHOBH co-star out of her life. The Melrose Place alum posted the ‘signs’ that someone is toxic. At the bottom of the list of signs, the meme says, “You’re not crazy. They’re gaslighting you.”

Lisa doesn’t confine her shade to Instagram. She recently wore a necklace with a direct FU message. Some fans thought it was aimed toward Denise.

The season finale of The Real Housewives of Beverly Hills airs Wednesday on Bravo. Follow us on social media for all of the latest television news.