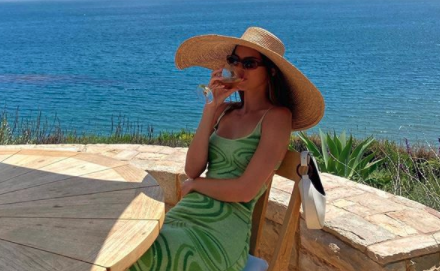 There is a mask mandate in several states across the country including California. Except it seems that Kendall Jenner and Kylie Jenner don’t feel the need to follow these rules. The two were seen at a party with no mask in site.

As most know, the pandemic is still around. Because of this, there is a mask mandate in California. Of course, that’s where Kendall and Kylie spend most of their time.

According to Elle, the sisters were seen going to a party this weekend at Justin Bieber and Hailey Baldwin’s home. Apparently, when they got out of their car, they should’ve had their mask on per California law. However, there are several photos and no masks in sight.

Kylie also posted several Instagram stories and there were no masks there either.

Per California’s mask mandate, even if they are outside, anyone together who isn’t quarantined should be wearing a mask.

“You should wear a mask or face covering whenever you’ll be around someone you don’t live with, including: In any indoor public space…[and] outdoors, if you can’t stay 6 feet away from others.”

This was brought to light the first time when Kendall and Hailey were at the beach together not wearing a mask.

Kendall and Kylie go out

This isn’t the only time Kendall and Kylie Jenner have been hanging out lately. Kendall, Kylie and Devin Booker were all seen going out for dinner at Nobu together. This happened just after Kylie’s birthday.

Kendall and Devin have had a lot of rumors surrounding them lately. The two have been hanging out for quite some time now. While sources say they are just having fun, apparently, Devin is falling for Kendall pretty hard.

“Kendall is having fun with Devin and seeing where it goes but she’s not seeing anyone else and neither is he,” a source reported. “Before he left for the NBA bubble he was part of her bubble and then the whole time he was away they kept in touch and now that he’s back they’re spending a lot of time together again.”

They seem to be hanging out quite a bit. Only time will tell where this relationship goes.

Are you surprised Kendall and Kylie Jenner aren’t wearing masks when they are going out to party? Let us know what you think in the comments. Come back to TV Shows Ace for more news on all of your favorite Kardashian/Jenner family members.