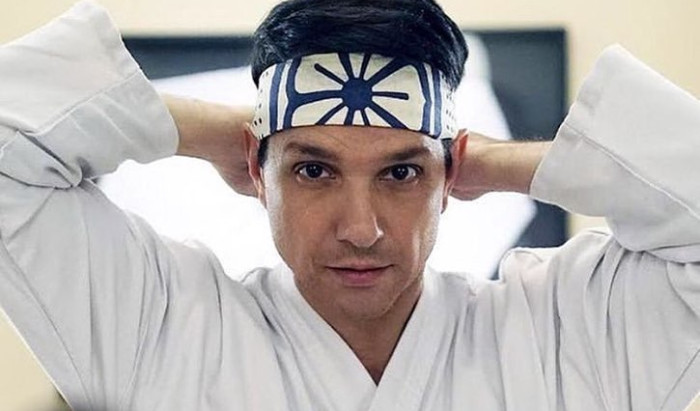 If you already have plans for the weekend, clear your schedule! Netflix is releasing the first two seasons Cobra Kai. The show is a continuation of the original Karate Kid movies. The streaming giant announced earlier this year that they bought the rights to Cobra Kai from YouTube.

Season 1 of Cobra Kai premiered on YouTube in 2018. Netflix plans to continue the series with more seasons.

What is Cobra Kai

Movie fans were first introduced to Danny LaRusso in 1984. Ralph Macchio plays the lead role in both the movies and Cobra Kai. In the movies, Danny takes karate lessons from sensei Mr. Miyagi (the late Pat Morita.) He needs lessons to defend himself from bullies, including Johnny (William Zabka.)

The mega-hit spawned two spin-offs. However, Danny has new love interests throughout the series. Then Hilary Swank took on the lead in The Next Karate Kid. A 2010 remake of the original starred Will Smith’s son, Jaden.

YouTube delighted fans of the 80s by bringing the rivalry between Johnny and Danny into the present. In Cobra Kai, Johnny is now the sensei to new students. Danny is a car salesman who finds himself at odds with his old rival.

Cobra Kai was a moderate success on YouTube. However, YouTube’s Premium service never really got off the ground. Therefore, the show will get a much wider audience on Netflix.

Netflix’s announcement that it was acquiring Cobra Kai included an announcement of another season. Netflix dropped the trailer for the upcoming season, which both disappointed and enthralled fans.

Fans are disappointed because Season 3 of Cobra Kai won’t premiere until sometime in 2021. Beyond that, Netflix has yet to announce the plans for the series..

But fans think they see another returning character from the movies in a split-second of the trailer. No, not Elisabeth Shue as Ali. The actress is willing to return and could possibly make an appearance in Season 3.

However, Netflix would likely keep her return close to the vest. Eagle-eyed fans believe Danny’s rival Chozen (Yuji Okumoto) is in the trailer. Chozen was Danny’s nemesis in Karate Kid Part II.

Netflix reveals the first footage from #CobraKai season 3 (due out next year), and while it's a super quick shot… is this Yuji Okumoto? The return of Chozen!!?https://t.co/RhcfsXVPIc pic.twitter.com/sI660fkNpW

Fans will have to wait until Netflix releases Season 3 next year to find out if their hunch is correct. Cobra Kai Season 1 and 2 premieres on Netflix on Friday, August 28.

Netflix is on fire with its recent content. Lucifer is back on Netflix with the first half of Season 5.

Tell us in the comments if you plan to watch Cobra Kai once hits Netflix.  Furthermore, what else are you streaming from Netflix right now?

Follow us on our social media for updates on all of your television and streaming favorites.

‘Storage Wars’ Brandi Passante 2021 Net Worth Revealed!!!
‘Sister Wives’ Kody Brown Defends His Anger On Twitter
Olivia Plath Opens Up About Family Conflict: ‘I Did Everything I Could’
‘The Little Couple’ Jen Arnold Reveals Rocky Has Replaced Her But With Who?
Danielle Busby Health Update: Terrified Of Invasive Procedure