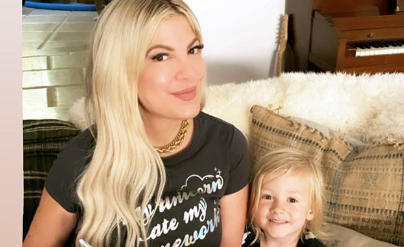 People are wondering why Tori Spelling let her daughter see upsetting information about her relationship. The truth, she didn’t really. While Spelling said she never hid her marital problems while doing the reality show, she didn’t make a point to tell her children. They can, however, read about it online.

Dean McDermott admitted to cheating on Tori publicly in 2014. After that happened, True Tori aired and they worked through things in the public eye. The show came on right after his infidelity so people couldn’t help but tune in to see what was going on. On a recent interview for the podcast Women on Top she said what her daughter saw online really upset her.

Mommy and Me Bath time… – Grateful for these moments. They grow up so fast. Loving that Beau still wants to take baths with his mama. Cuddles and Bubbles. #bathtime #BeauBeau 📸 by @liammcdermott2007

Tori Spelling is glad her story lived on through the internet. She said, “that’s not something you think about in that moment.” The two share five kids between the ages of twelve and three.

Tori admitted her biggest fear in her relationship according to People was that Dean would cheat on her. She said, “So when it happened, I was like, ‘See, I always thought from day one he was going to cheat on me,’ and it wasn’t about him, that was about me. I was like, ‘Okay, I know I’m not good enough.'” She went on to say she thought he’d realize it and leave her. Tori said she told him often she thought he would eventually cheat and he said it was crazy. Then, when he did it, she let him know she’d always been right.

Now Tori says she is glad she stayed in her marriage and worked on it. Tori said it rocked her foundation and everyone told her to leave. She maintained she loved him and wanted to work it out for her children. Tori said, “I make my own money. I can be a single mom, but I actually really love him and I want to work on this.”

The Infidelity Had An Unexpected Affect On Their Children

Tori Spelling said they didn’t try to hide anything, but her kids haven’t seen clips talking about the cheating. She did try to keep them sheltered from it a bit, but the internet is full of information and she couldn’t keep her daughter from seeing it.

In a past interview when she talked about the scandal she said, “we made the conscious decision based on our love for each other to tough it out and work through it.” Now Tori says they are rock solid and happy to be together. Maybe they can be a role model couple for others experiencing the same type of rockiness.