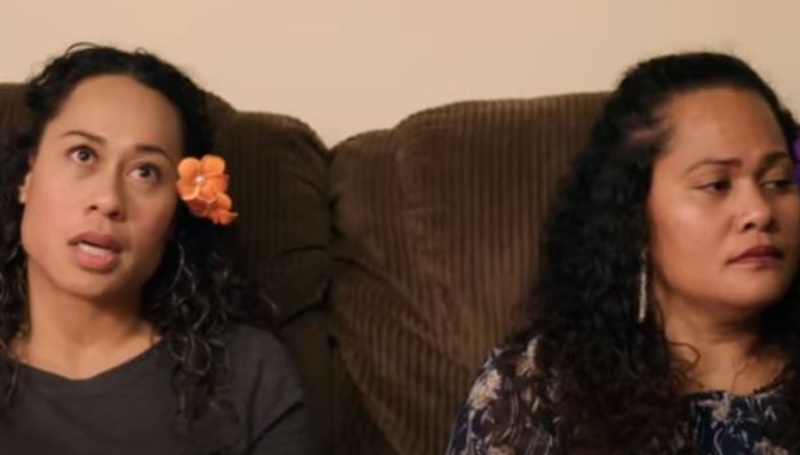 90 Day Fiance: Happily Ever After? stars Kalani and Asuelu usually get a lot of criticism from fans. But during the latest episode, even those fans with little time for Kalani found themselves rooting for her. It came after a very hostile stance by his family, who accused her of falling pregnant deliberately.

90 Day Fiance  – Kalani struggles with both Asuelu and his family

We reported earlier this month, that Asuelu seemed determined to take loads of gifts and cash to his family. Kalani felt that their budget simply couldn’t stretch that far. That resulted in a huge argument. Finally, burdened by gifts and a pretty empty wall, the couple made their way to Samoa. There, Kalani encountered a rather hostile family.

In Sunday’s episode, Kalani went off and met with Asuelu’s mother Lesina. It seems she thinks her son earns an awful lot of money in the USA. In fact, she claims it’s his duty as a son to send a lot of money home to them. Actually, it seems that Asuelu’s caught between pleasing his wife and pleasing his mother. Things don’t go well for the 90 Day Fiance couple in Samoa.

90 Day Fiance fans saw Asuelu explain to his mom that he doesn’t have much money. So, she told him he should touch Kalani’s family for more money that his family wants. When Kalani arrived she quickly tackled Lesina and Asuelu’s sister. She explained that they don’t have money to give the family at the moment.

As a result, sister Tammy simply accused Kalani of laziness. And, his mum insinuated that Kalani originally fell pregnant, deliberately forcing Asuelu into marrying her. Fans of the TLC show never liked Asuelu. In fact, rather than being the catch of the century, they believe Asuelu’s more like a third child in Kalani’s life. But for once, they dropped their criticism of Kalani and sided with her against the hostile family.

Kalani needs to divorce Asuelu & send him packing back to his family. Screw that whole damn family. He can go back to tending chickens or whatever his simple minded ass did in Samoa before he met her. Ungrateful part time yogurt slinging ass. #90dayFiance pic.twitter.com/A7mmowq4mK

Furious fans ran out of patience with Asuelu and his family. One of them said on Twitter, they “can’t believe” that they actually “feel sorry” for Kalani. An irritated fan noted, “So kalani had to deal w her mother in law saying that she doesn’t care ab her grandchildren & then came home to her husband calling her crazy? How is Kalani not fist fighting that whole family?”

Another 90 Day Fiance fan commented, “Kalani being accused of trapping dude is so laughable. Seems like she can’t figure out how to get rid of him. lmao he’s a yogurt slinging, amateur volleyball playing manchild that is quite possibly on the spectrum. How does she benefit? D*ck game must be off the chart.”

Kalani was WAY more chill than I would have been hearing people say such nasty things about my family. Like damn, that girl’s got some patience. #90DayFiance

Plenty of other fans agreed that Kalani deals with a lot of BS from him and his awful family. Do you agree? Sound off in the comments below.