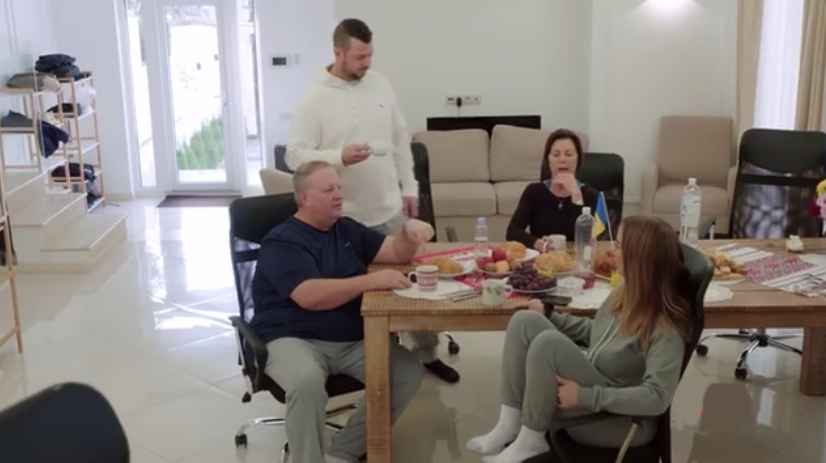 90 Day Fiance star Elizabeth has a big problem. It seems her family just isn’t going to get on with Andrei’s family and culture, no matter what. After fights between the male side of her family and Andrei, the women have now arrived. While they are in the country to attend Elizabeth and Andrei’s second wedding, they are certainly not celebrating. The latest is their insults about the food of Moldova, which they claim is “disgusting.”

After the recent battles between Elizabeth’s brother, Charles and her husband, Andrei, more drama is set to come. The female contingent of the TLC reality star’s family has arrived and they are none too happy. In fact, it looks like no one on her side of the family is making any efforts to enjoy their trip

Elizabeth’s sister, Jenn, is particularly scathing about the food served up to them on their first morning in Moldova. In the latest sneak peek for 90 Day Fiance: Happily Ever After, Elizabeth’s family is seated around the table.  Said table is groaning with bread, grapes and other food which the average person would be more than happy to chow down on. Despite this, these people are doing nothing but complaining.

Jenn, Elizabeth’s sister, tells the camera that she hasn’t eaten in a day and a half. Let’s face it, she is hungry. However, looking at the table she says, “The food so far is just not what I’m used to.” She goes on to ask, “Can a girl get some eggs and bacon around here, and not like, raw bacon?” Jenn continues, saying she feels like she is going to lose weight while she is there, because of the food. Looking at the perfectly healthy grapes, she says, “Like I can’t eat any of it.”

Jenn and Elizabeth’s father, Chuck, agrees with her sentiments. He says, “You know, like, when you go to a dinner and you have to say, ‘What’s that?’ ‘What’s that?'” The 90 Day Fiance patriarch reckons that is “not good.” Chuck is obviously a worldly traveler!

As noted by E! News, the family goes on to criticize Andrei and the fact that he eats this food in his own country. Elizabeth’s brother Charlie pipes up. He says, “Andrei was over here eating that bread with the pork fat on it like it was nothing.” According to Charlie, that is “Disgusting, dude!”

Elizabeth’s sister starts theorizing that Moldovans eat pork fat because it is cheap. The 90 Day Fiance cast member says it is “almost like the scraps.” Charlie responds, pointing out to her, “You’re in a poor country, dude.” At this stage, Chuck adds that Andrei and his family are eating “peasant food.”

It turns out Jenn doesn’t like the idea of peasant food. She pipes up, saying, “I’m sorry like I’m open to trying stuff, but not some s–t like that.”  So wonderfully cosmopolitan of her!

Will the family enjoy the wedding?

Bear in mind, this is before the wedding, so goodness knows what is going to happen then. Fans will remember Elizabeth suggesting to Andrei they serve some fried chicken or burgers at the wedding for her family to eat. Now we get an idea of why!

Catch the full story on 90 Day Fiance: Happily Ever After? on Sunday at 8 pm on TLC.

Wait, Why Was Jeremy Vuolo Silenced On TikTok?
Paris Hilton Joining ‘RHOBH’ Would Be ‘Hunky Dory’ With Fans, But Will She? Kathy Spills All
Wait, Did Katie Thurston Just Accuse Greg Of ‘Gaslighting’ Her?!
Savannah Chrisley ROASTED For Being Spoiled & Privileged
Are Josh Duggar’s Legal Troubles Making The Family Go BROKE?