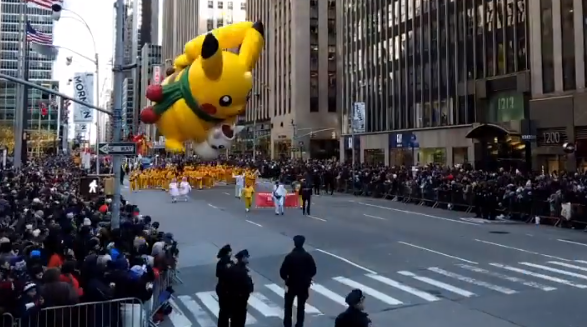 Events in 2020 are being canceled left and right. But right now, it seems like one annual tradition will continue as scheduled. Right now, the Macy’s Thanksgiving Day Parade plans to bring some joy and holiday cheer to the streets of New York City. However, there will be some changes to protect people from COVID-19.

“For more than 90 years, Macy’s Thanksgiving Day Parade has kicked off the holiday season with its signature entertainment spectacle, making it one of the world’s most beloved events,” the company announced on its website. “Following our successful, safe and innovative production of Macy’s 4th of July Fireworks, it is our intention to similarly reimagine Macy’s Thanksgiving Day Parade this November. Stay tuned for more details later this fall.”

But, what changes can we expect? NYC’s mayor, Bill de Blasio, said he expected scaled back events instead of the enormous celebrations we’ve come to love.

“I think some [are] going to be virtual, it might be some small in-person pieces, spread-out pieces,” said Mayor de Blasio. “It’s not going to look at all, of course, like what we are used to. But the important thing is the traditions will be kept in some way.”

Some celebration is better than none at all, after all.

One of New York City's most famous holiday events, the Thanksgiving Day parade, is likely to look very different amid the ongoing coronavirus pandemic, New York mayor Bill De Blasio said at a press conference on Thursday. Macy's said it plans to hold its annual holiday parade in November, but will "reimagine" the event in a way that will be similar to its Fourth of July fireworks show. To avoid drawing crowds, the fireworks were held in five-minute displays spread over several days rather than a single event, as it ordinarily takes place in the city. Macy's didn't reveal exactly what it's planning for this year's Thanksgiving Day parade, but said it would provide more details in the fall. The Thanksgiving parade, which Macy's has organized for more than 90 years, is a major tourist draw and reliably scores strong television ratings. #macys #thanksgiving #macysparade #float

The ongoing Coronavirus pandemic interrupted regular television schedules as we know it, so it’s a bit of a relief the parade can still happen. Even the long-running show, Survivor, won’t have a new season this year. At least, not on time. Like many shows, Survivor is postponed until it’s safe to resume filming again.

It’s Been a Long Year for NYC

New York City was once the epicenter of the Coronavirus pandemic. However, it worked hard to curb its case numbers. The parade may be possible this year if numbers continue to stay low. Many experts predicted the nation will see another uptick in Coronavirus cases this fall, which also marks the beginning of cold and flu season. Parade organizers will have to work very hard to keep everyone safe and enforce social distancing measures. But for now, everyone will have to wait for more information.

PEOPLE magazine notes that the famous Thanksgiving parade began back in 1924. It’s been publically televised on NBC since 1953. It just wouldn’t feel like the holiday season without it. For nearly 100 years, people flocked to the streets to watch the colorful floats and giant character balloons go by. Even if you can’t be there in person, it’s always a treat to watch it on TV.