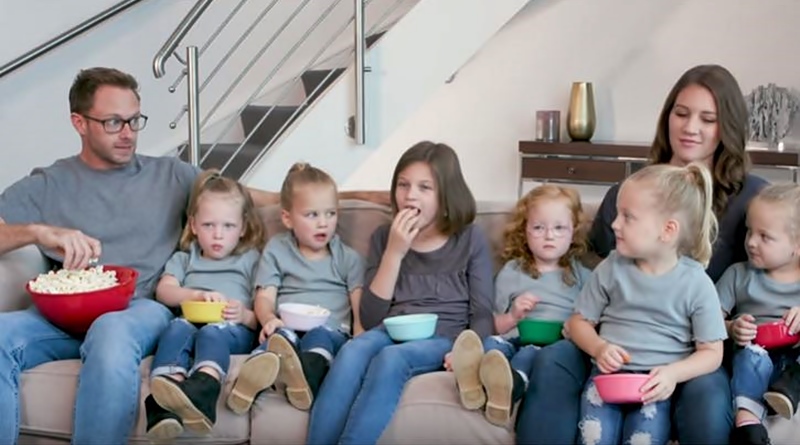 OutDaughtered fans heard that the quints all went off to their first week of Kindergarten. They started at a public school, and all chose the same Greason Bee outfit for the first day. Now, they made it through and Adam and Danielle took them out for some yummy treats.

OutDaughtered – back to school seems a hot success with the quints

We reported that a flurry of activity arrived as the quints started Kindergarten. It also looks like Riley took a step back from grade one. But, that doesn’t mean she won’t upgrade later. Their public school’s open, so off they went. On the first day, they all chose the same outfits for their big day. It certainly seems like they enjoyed their week at school, and the Busby’s updated with lots of Instagram stories and photos.

On Friday, school wrapped up for the week, and on Saturday night they all went out to a diner for a special meal. Adam said that even though it’s late for the quints, they enjoyed sitting outside eating their pizza. Actually, school probably works up an appetite as they left hardly anything on their plates! As for the late night, well, Adam took some of them for a sugary treat on Friday, so maybe the OutDaughtered quints have some energy to burn!

The outdoor meal with Blayke and the quints

Over on his itsabuzzworld account, Adam shared a photo of them all sitting outdoors at the pizza place. The sunset looked really beautiful. And, Adam mentioned it in his caption. The kids chose a different outfit this time. Riley looked very cute in her blue floral outfit. At the end of the table, big sister Blayke chose black for the occasion.

No doubt, the OutDaughtered kids all love going out a bit more these days. After all, Amomama.com reminds readers that they couldn’t hold a big fifth birthday party for the quints this year became of the coronavirus quarantine. Despite fans concerned about the family going out to places now because of the virus, clearly they chose a place with outdoor dining on the weekend.

It’s a late dinner night for us! But look at that sky 💕 #beautiful #familytime #lovemyfamily #itsabuzzworld

Fans delighted with the kids enjoying their treat

Many TLC fans just can’t get enough of the Busby kids. They seem delighted whenever Adam and Danielle share any news about them. While plenty of them agree the cute kids look happy, some people worry about mosquitos. One OutDaughtered fan wrote, “The sunsets here in ATX are usually amazing. But there’s been so many mosquitoes lately. Not really worth sitting outside for 😂 🤷🏼‍♀️.” Luckily, the quints live in Houston, and not in Austin!

Did you all celebrate the first week of school lately? What about eating outdoors? Do you think it’s safe these days? Sound off in the comments below.

Roloff Farms Construction Resumes: Will It Complete Before Amy’s Wedding?!
Todd Chrisley Admits His Wife Julie Has Way More Class Than He Does
Wait, What? Does Isabel Roloff Plan To Raise Her Baby In A Van?
Not Lindsie Chrisley’s Real Father? Todd Kills With Kindness In Response
Clay Harbor Defends Andrew’s Choice To Leave ‘The Bachelorette’