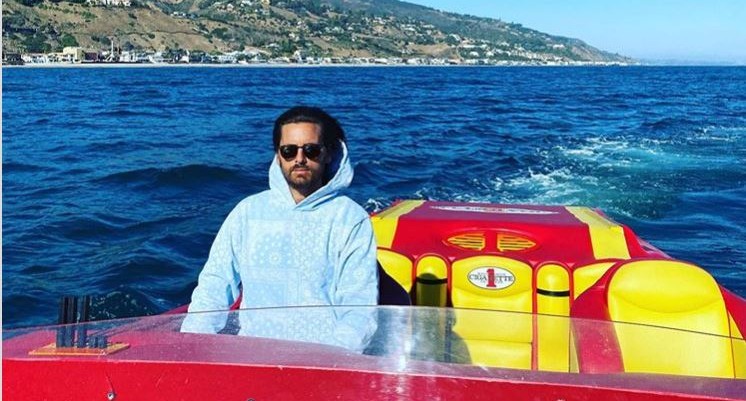 ‘KUWTK‘ star Kourtney Kardashian is taking up for her kid’s father Scott Disick. Because “he deserves to deal with his past traumas privately, he felt so betrayed.”

Kourtney in a sneak peek for the KUWTK’said Disick felt “violated.”

Photos were leaked online showing Scott was in rehab. Therefore, Disick had no choice but to check himself out quickly.

In a clip of Keeping Up with the Kardashians, Kim Kardashian West calls Kourtney. Kim called because she read online that Scott was seeking help for treatment.

“Hey, is that true… about Scott?” Kim asks Kourtney over the phone, to which the reality star responds “Yeah.”

In Kim’s confessional interview on KUWTK, she said she found out about Disick’s rehab stint after reading it in the news.

“I heard that Scott went to rehab by seeing it online and it looks like someone at the facility leaked a photo of him and I feel really bad for him,” she says.

“It’s really so awful,” says Kourtney, clearly upset. “They leaked his actual conversation with the therapist. It’s only been just him and the therapist.”

Kourtney says Scott is so upset over the news, “He’s never been more betrayed in his life.”

“He’s packing and he’s definitely coming home,” Kourtney explains. “He’s really upset. Because he was actually going to work on himself… and like, his like traumas.”

Kourtney reveals in her own confessional interview that whoever leaked photos “should be really ashamed of themselves. Because everyone deserves to deal with their past traumas in privacy. Scott was completely violated,” the KUWTK star says.

Back on the call, West asks “What about that breach of confidentiality?”

“Yeah, I think he absolutely should file a suit,” Kourtney says.

Scott Knows Who Leaked The Photos

Disick was at a Colorado treatment facility working on “past traumas.” Scott of KUWTK was only in rehab a week before the photos in question surfaced. Therefore, he checked himself out and flew back to Los Angeles.

In a previous clip of KUWTK, Disick expressed frustration over the situation. During a zoom call with Kris Jenner, Kim, Rob, and Khloe Kardashian he said, “There couldn’t have been a bigger betrayal.”

“She leaked me being there to the press,” Disick said. “I don’t trust anybody here.”

After the incident in May Scott has focused on his kids with Kourtney. However, he has also been dealing with his split from his girlfriend of three years Sofia Richie.

According to People, a source said, “It’s always been difficult for them to balance their relationship with Scott’s family life. Therefore, his kids will always come first.” There’s no word yet if their breakup will be on KUWTK.

KUWTK will return with the second half of Season 18 Thursday, September 17 at 8 pm on E!

Chase Chrisley’s Girlfriend Emmy Medders Stuns In Sexy Black Bikini
Clay Harbor Defends Andrew’s Choice To Leave ‘The Bachelorette’
Roloff Farms Construction Resumes: Will It Complete Before Amy’s Wedding?!
Javi Marroquin Calls Cops On Lauren Comeau For Abuse, Guess Who Has His Back On This?
Just One Duggar Wishes Jim Bob Happy Birthday: Who Was It?