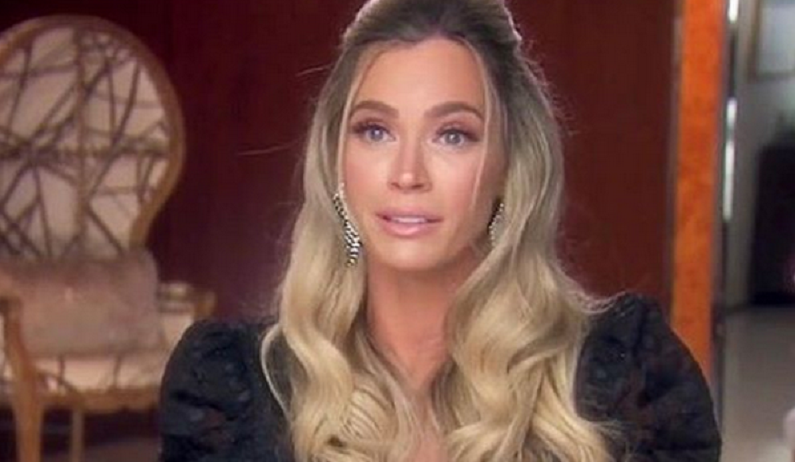 Teddi Mellencamp is giving herself credit for RHOBH’s ratings. The coach isn’t just taking accountability. She also wants to give credit where she feels it’s due. Season 10 of The Real Housewives of Beverly Hills has been centered on the drama between Denise Richards and Brandi Glanville.

Teddi received backlash for the way she confronted Denise about her alleged affair with Brandi. It got so bad that Teddi had to momentarily turn off comments and tell fans to stop threatening her life. Now, the reality star held a Q&A on her Instagram Stories. There, she addressed the high ratings of Season 10.

The accountability coach got confident on Wednesday, August 19. Before the recent episode of The Real Housewives of Beverly Hills, Teddi posted a screenshot from a fan who suggested that she’s responsible for the high ratings of the Bravo series. The ratings revealed it attracted around 1.5 million viewers each week. Teddi feels that her role in the drama has secured her return for Season 11.

“Even bad publicity is good publicity and the fact that people cannot stop talking about Teddi!” the fan wrote. “They talk about her the MOST & the ratings are the highest… thank you haters for honestly securing her diamond. Keep her name in yo mouths.”

When I say tonight’s #RHOBH is a good one followed by @kylerichards18 and me on @bravowwhl I ain’t lying, right @bravoandy 🤪All starting at 9PM on @bravotv.

Teddi shared the post along with the hashtag, “truth.” She continued, “I don’t know you but I see you,” she responded to the fan with the laughing-while-crying emoji. She made it clear that she should be credited for the high ratings. But fans aren’t happy with her. They want to know why she’s become such a “mean girl,” especially during this season.

One follower addressed Teddi’s “mean girl” tendencies. In a follow-up post, Teddi claimed that producers want to focus on the controversy rather than moments from her personal life. Teddi was also asked about that baby shower that aired on Wednesday night. She revealed that some of her non-famous friends were good at tolerating her RHOBH co-stars as they argued over the Brandi and Denise allegations.

RHOBH star quiet on her friendship with Denise

However, Teddi Mellencamp wouldn’t reveal where she stands with Denise Richards to this day. It was clear that the two were not on good terms during RHOBH Season 10. She refused to talk about the status of their friendship. Instead, she told a fan that they would have to wait until the virtual reunion episode to find out.

As TV Shows Ace previously reported, Erika Jayne poked fun at Denise’s “mean girls” comment. She seems proud to be one. Then on Instagram, she called out Denise for her love of boot cut jeans. She credits Denise’s fashion choice and her fellow “mean girls” for the boost in ratings.

Ain’t no baby shower like a Bev Hills baby shower. And like my tagline says, you never know what to expect when I’m expecting! Love that so many of my friends were able to join— and then asked to leave 🤣 Make sure you watch #RHOBH tonight at 9PM on @bravotv #bucadibaby *not everyone could be photographed bc 💩 was hitting the fan. Thank you @doritkemsley @kylerichards18 for hosting.