While OutDaughtered is currently in its off-season, Adam Busby periodically shares lengthy YouTube videos of his adorable little girls. The latest video featured a nearly 20 minute cooking session with Adam and the quints. If you haven’t had a chance to watch the fun video yet, you can find it below!

Cooking with quints isn’t easy to do.

Now, a child cooking with their parents is a very rewarding experience. And, it is a great way for a parent to teach children basic cooking skills. For preschool and kindergarten aged children, few things are more exciting than getting to help mom or dad with grown up tasks such as cooking!

Cooking with a child, however, can be a lot of work. There are a lot of cooking steps younger tots may not be big enough to do properly. And, a lot of the steps require hand over hand assistance. Sometimes those small hands trying to help just frustrates. And, slows the process. Now, imagine multiplying those little helpful hands a few times.

In a nearly 20 minute YouTube video, Adam Busby documents how much having quints amplifies the woes of cooking with children. As the video progresses, one of the biggest issues is when a step isn’t big enough for all five quints to help. For example, Adam Busby needed to pour one can of condensed milk into the mixture of ingredients. The problem? There are five quints and one can. So, he had five sets of eager hands wanting to help daddy more the milk. So, trying to be as fair as possible while continuing to move forward with the cooking process was certainly challenging!

Noticeably, Adam Busby does a fantastic job of keeping his cool while dealing with he struggles of cooking with quints. And, as many know, this is something other parents struggle to manage and maintain with just a single child!

Quints fight for space in the kitchen with Adam Busby.

Toward the beginning of the video, fans see the quints fight for space in the kitchen. Nearly all of the quints feud over which section of the counter space is theirs to work in. Hazel, however, is more than happy to share her space with her sisters. 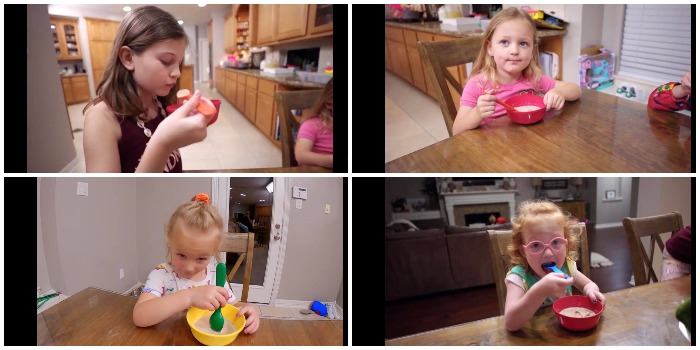 Adorably, they continued to remind each other not to eat any of the candy. They were just opening it to help daddy.

Eventually, Adam was able to complete making ice cream with the quints. And, it certainly looked like they enjoyed it!

So, do you think cooking with so many little helpers is challenging?