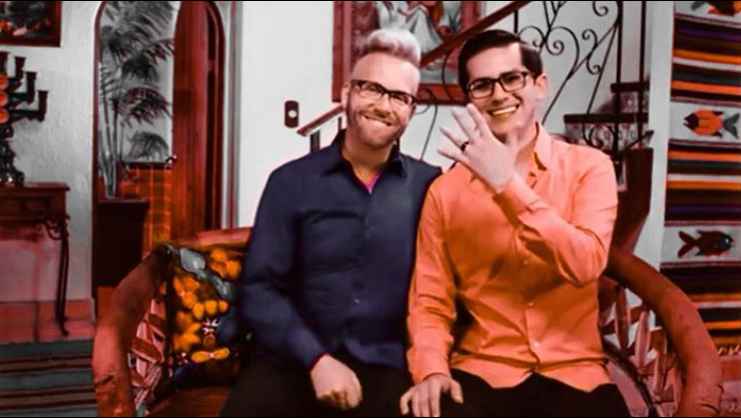 Like all TLC reality stars, 90 Day Fiance: The Other Way’s Armando and Kenneth are always in the public eye. While they are fan favorites on the show, not everyone thinks the same way. This is especially so in a teaser clip released by ET from the upcoming episode. In the clip, a man yells a homophobic slur at the newly engaged couple, right in front of Kenneth’s two daughters.

In the clip exclusively on ET, Armando, 31, and Kenneth, 57, dine in a restaurant. They are enjoying tacos with Kenneth’s two daughters while celebrating the pair’s engagement.

Armando is naturally thrilled when Kenneth proposes to him. However, he is still somewhat uncomfortable with public displays of affection in conservative Mexico. Armando notes that some people in his country are very homophobic. As Armando has only recently come out to his parents, he is also nervous about telling them about their engagement.

Armando, Kenneth and his two daughters dine out

The teaser clip shows Armando and Kenneth having fun and enjoying the meal with Kenneth’s two daughters. However, the fun ends when a man walks past them, yelling a homophobic slur as he leaves. Armando translates what the man said and they are all shocked. Kenneth says he wished he had known what the man was saying so he could have responded to him. Armando assures his fiance that this would not have gone well.

Naturally, Kenneth’s daughters are shocked by the incident. They tell the 90 Day Fiance cameras that they never experienced anything like this growing up in Florida. One daughter says they aren’t used to this behavior, but she hopes it is an eye-opener to her dad. She says it certainly was for them and she wanted to “punch that guy in the face.”

Armando calms things down, telling everyone he doesn’t want them to get hurt. Kenneth then asks his daughters not to let the nasty incident affect them, while they fight back tears.

Happy 24th Birthday to my beautiful, wonderful, amazing daughters! The 13th is a lucky number! I love you more than you know! #triplets #90dayfiance #90dayfiancetheotherway

In June, Armando and Kenneth opened up to ET about being the first male gay couple on the TLC reality show. Armando says he was nervous and not sure what to expect. The Mexican went on to explain that he has only recently come out, so this is a big step for him.

Armando also says that no matter what negative opinions come out of 90 Day Fiance, he will stay with Kenneth. He says his fiance has been the one person that has always supported him. Armando says no matter what happens, Kenneth is his happiness. Whatever happens with Armando’s parents or anyone else in the world, nothing will take this away from him.

Watch the scene from Monday’s episode of 90 Day Fiance: The Other Way on TLC at 9 pm ET/PT. Catch the teaser clip on ET’s website here. Also remember that the mid-season finale is coming up on Monday, August 31.