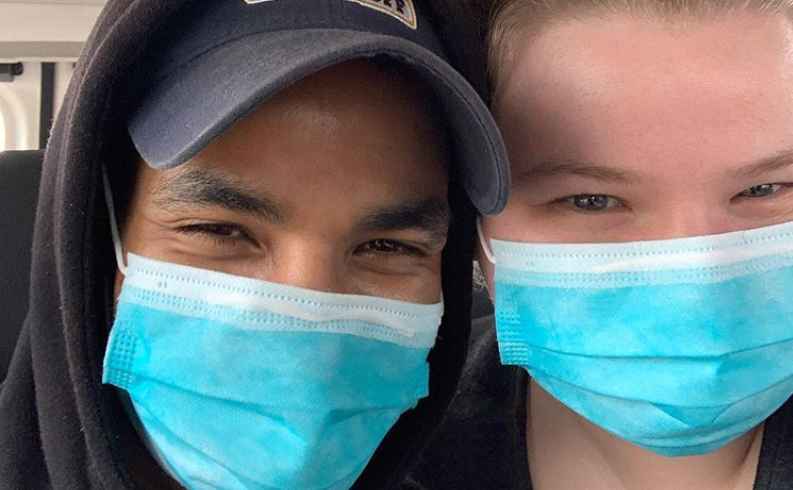 90 Day Fiance alum Nicole Nafziger spent months of quarantine time in Morocco with her fiancé, Azan Tefou (real name Hassan M’Raouni). Throughout her time there, she received hate for “abandoning” her daughter May and for telling constant lies. Meanwhile, now home in Florida, Nicole shared a new image of May, where she shuts down the claims.

One commenter writes on Nicole’s post asking why she lies about Azan’s name. They point out “his name is NOT Azan. It’s HASSAN.” Moreover, they go on to tell Nafziger that she lies about everything. Nicole fires back at the comment on August 19, saying she calls her fiancé Hassan all the time. She explains that “some people don’t like to use their real names on the show.” Nicole says he decided to call himself Azan right at the start, four years ago.

Nicole and Azan first met via a dating app and were featured on 90 Day Fiance twice. On top of that, they returned for the TLC spinoff 90 Day Fiance: Happily Ever After? Many viewers still accuse Azan of just wanting a green card, while Nicole has stood by their relationship all along.

Haters hit a selfie of Nicole and May

Now home, Nicole posts a heartwarming selfie of herself and May. She captions the image, writing, “No matter what’s going on around us we know ourselves more than anyone else.” Nicole ends by writing, “Only you can tell the story through your eyes. Stay true to yourself and the loved ones around you.”

There is one thing we all need to remember. No matter what’s going on around us we know ourselves more then anyone else. Only you can tell the story through your eyes. Stay true to yourself and the loved ones around you♥️ #staystrong #bepositive #BeKindAlwayss #BeYou

Yet another hater attacks Nicole about a rumor that has been circulating online. In their comment, they ask, “All we wanna know is who is Azan’s wife?” Nicole has been asked this question before and as always, replies, saying “He doesn’t have one.”

Responding to another comment, Nicole asks, “If he was married at 19, then why didn’t it say that on his papers when we were doing the K-1 [visa]?” As noted by In Touch, she then points out that you have to have a paper stating you have never been married to be able to apply. Moreover, as Nicole put the packet together, she saw that paper, “Therefore he doesn’t have a first wife [kiss emoji].”

It was only recently that Nicole was able to return home to the United States following the five-month quarantine period in Morocco. She arrived home on August 10, thrilled to be with May and her family again. Her mother Robbalee has cared for Nicole’s five-year-old while she was away and tells haters, “There was no abandonment.”

As she left Morocco, Nicole posts a selfie of herself with Azan, both wearing masks. She captions the image to say how happy she was to get to see him. Nicole closes off her caption, writing, “Hopefully next time I won’t have to leave and we’ll be a family with May.” Let’s wish Nicole, Azan and little May a wonderful future together!