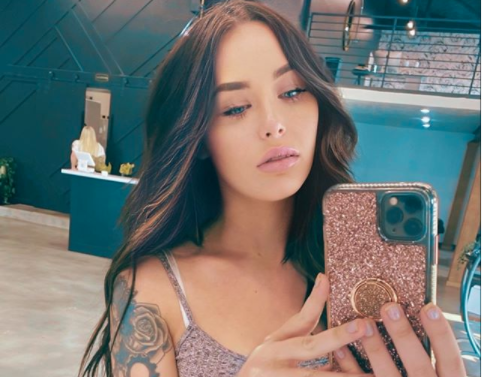 Deavan Clegg star of 90 Day Fiancé: The Other Way shared an honest message on Twitter, which has fans concerned. She posted that she cannot wait for the world to find out the “horrible reason” she “moved back” to America.

Why did the 90 Day Fiance star move back to the US?

Deavan made this candid Twitter post about wanting fans to discover why she is back in America, adding in that the “truth will come out eventually.”

According to InTouch Weekly, the original Twitter post is now deleted, but the entire message was caught by blogger John Yates. Deavan’s message continued saying, “This isn’t a game. You guys did me in, you win … Thanks for leaking who Drascilla’s [biological father] is.”

My little bug🌸💕 getting ready with my girl. #90dayfiancetheotherway #90dayfiance #mornings #getready #cutekids

The 90 Day Fiancé celeb continued speaking her truth sarcastically thanking fans once again and stating that she has a “life-long protective order” against her daughter’s father for a reason. She then went on to say she was going to turn the comments off. Deavan continued her message saying, “You all really believe everything you see on TV. You guys don’t know the truth or half of it. Have fun with your dumb show.”

She finally wrapped up her message saying there is more to the story about her relocation to the US and confirming that fans will find out more in the future.

It seems the pair’s relationship is not exactly on track as fans have noticed Deavan has not been wearing her wedding ring. And even earlier this year Deavan’s mother, Elicia Clegg, actually confirmed that she and her husband Jihoon Lee were not quarantining together.

Deavan is over reality TV

The 90 Day Fiancé beauty has been candid with fans quite a lot recently. She previously shared her feelings on a since-deleted Instagram Live shortly after the Monday, August 17 episode aired. She said, “Normally, I don’t explain an episode when something isn’t seen on camera. But it’s the fact that my mom is in tears right now that’s really upsetting because no one actually knows what happened because they didn’t catch it on camera what really happened and why we were upset.”

She went on to explain that fans saw scenes from two separate incidents edited together. Deavan blamed the editing for portraying a scenario that did not actually happen. The editing than led to even more backlash and comments from fans about the couple and their families. It seems that the 90 Day Fiancé star is over the reality TV drama these days.

What do you think of Deavan’s honesty with her fans? Let us know what you think in the comments below. Be sure to keep up with their story on 90 Day Fiance: The Other Way. It airs on TLC Mondays at 9 pm ET.