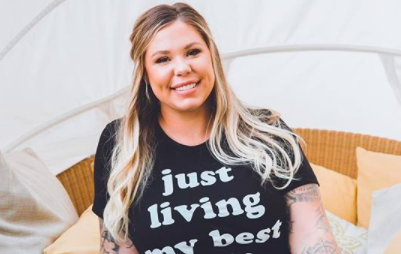 Teen Mom 2 star Kailyn Lowry is no longer bashing the father of her lastest son. But, rather she is defending Chris Lopez and dads of her other sons. She clapped back at a fan who called her out in the comments of one of her latest Instagram posts.

The drama went down in the comments section of a lovely family photo Kailyn posted featuring all four of her boys.

According to InTouch Weekly, the Instagram user wrote, “Poor babies, 4 men, but not one father. #birthcontrol.” But, one of Kailyn’s fans came to her defense before she could even reply writing, “What? First, it’s three men. Second, their dads are in their lives and are fathers. Make it make sense.”

The family portrait can be seen below.

The Teen Mom mamma finally replied herself sticking up for all the dads. She said, “Right! Just because I’m not with their dads doesn’t mean they’re not present. People are weird.”

There were plenty of additional negative comments from internet trolls plaguing down her happy family moment. But, the true fans were not standing for it. The supportive comments came flooding in.

One fan wrote told a troll to, “Get a d*m life Karen.” While another roasted a hater saying, “4 kids. 3 dads. 0 of your business.”

Kailyn can definitely relax knowing her fans will always have her back when it comes to the Instagram battlefield!

Dealing with haters is nothing new to Kailyn. Over the last few weeks since giving birth to her fourth son she has had to hop into the comments section several times. Such as when she shared her new baby’s name with the world.

Kailyn first revealed her son’s name on Monday, August 10. She posted a photo of her son featuring his new baby blanket, revealing his name was Creed. However, fans could not resist commenting jokes about how she came up with Creed. The comments became so much that Kailyn replied to set things straight.

Additionally, Kailyn made the bold choice of giving baby Creed his father’s last name. On the August 13 episode of her podcast “Coffee Convos” she revealed that she gave her son the last name of Lopez.

What do you think of Kailyn’s fans having her back on Instagram? Let us know what you think in the comments below. Be sure to watch new episodes of Teen Mom 2 on MTV.