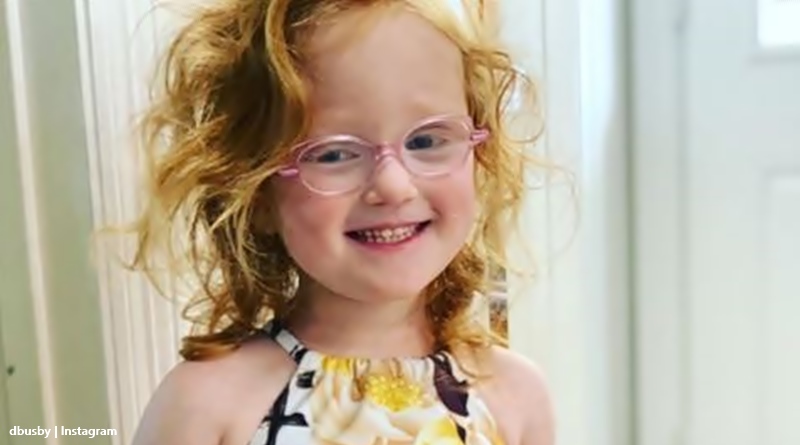 Outdaughtered quint Hazel usually sports her distinguishing red hair in long curly locks. That hair, and the fact she wears glasses, makes it rather easy for fans to identify her. But, with her hair pulled back and in certain lighting, she looks completely different.

Adam and Danielle recently shared quite a lot of photographs of their daughter Hazel. On August 15, we reported that Hazel went for another eye check-up. During the last season of the TLC show, fans heard that the Busby’s feared she might need further surgery. The little girl already underwent one operation to repair her condition that produces rolling eyes. However, Danielle reported the good news that she sailed through her recent check-up.

Now, the Outdaughtered dad, Adam shared a photo of Hazel when he picked her up from school. Obviously, she’s delighted at seeing her friends once again. Adam said she’d been running around playing like “crazy.” But, the photo he shared made fans think for a brief moment, that he shared a photograph of a little boy. With her hair pulled back she looked completely different.

Hazel is the spitting image of her dad

In his photo, Adam and Hazel sat next to each other in the van. They both wore their glasses. Adam captioned it with, “Hazel said, “Daddy let’s take a picture” when she got in the car” after school. Some fans mentioned that initially, they thought Adam shared a photo of a little boy. One fan asked, “did she get a haircut or just crazy hair?” Adam replied saying, ” just crazy…from playing and sweating outside.”

With her hair pulled back, many OutDaughtered fans noticed that Hazel really is the spitting image of Adam. A follower commented, “Adam, she is a mini you!” Another fan replied saying. “I was just thinking of this.! I never truly saw how just alike until this picture.” The fan added that they watched the show from the beginning.

Hazel third-born quint was the smallest of the bunch

TLC reminds fans that Hazel followed Olivia at birth. Born third, Hazel weighed in as the smallest quint at just two pounds. She was also the last quint that learned how to walk. But, ahead of Pre-K, she had the best vocabulary skills. The smallest quint caught up with her sisters, and these days, fans love her natural beauty.

Hazel said “Daddy, let’s take a picture” when she got in the car after picking the quints up from school! #hazelbasil #itsabuzzworld #outdaughtered

But, OutDaughtered fans never saw Hazel with her long hair back and her bangs off her forehead. It’s the first time that any of them really discovered that she looks exactly like her Dad. Notably, her smile forms her lips the same way as Adam, fans noticed. Did you realize the likeness between Hazel and Adam until now? Sound off in the comments below.