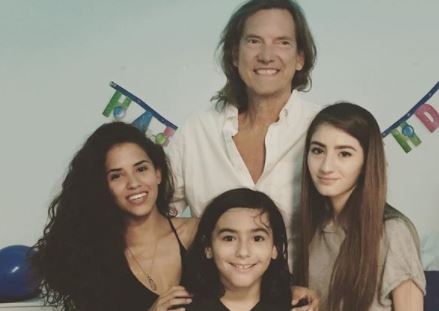 Marrying Millions fans are enjoying seeing Bill Hutchinson and Brianna Ramirez once again. This couple has been on both seasons of the show. If you want to know how they are doing, you are in the right place to get the details. Remember that this season was filmed a while ago.

Bill and Brianna have a 40 year age difference, but that doesn’t bother the couple. He is the one with the money, but they do seem like they are in love. Brianna is even close to Bill’s children from a previous relationship. He has six children, but most of the pictures are with the younger ones who probably still live at home. His kids aren’t on Marrying Millions much.

They talked to Fox News and explained a bit about their relationship. Bill explained how their Marrying Millions relationship works.

“I think women are more mature than men, and I think I’m probably very immature for my age. I always tell my 16-year-old daughter boys are idiots. Boys are dumb. Don’t fall in love. Don’t get hurt. Don’t cry. They’re not worth it. Wait till you’re older.”

He also shared that the two hardly ever fight. It is great news to see that they get along. He shared more.

“I totally get what you’re saying. We actually had one of these events last night. We got in a little dig. And I don’t want to be preaching down to her. Sometimes I do say, ‘Hey, baby, I’ve been on this earth 40 years longer than you have so I have a little bit more wisdom than you do. Not that you’re not equally as smart as I am, but I’ve been around. I’ve made more mistakes than you have. And I’ve learned from my mistakes. So let me share with you how that goes and why I think the way I think.’”

Bri has an Instagram that isn’t in her name. It is full of pictures with Bill and his kids. The latest one was just a week ago talking about how Bill’s son King is now taller than her.

It finally happened guys ! King’s taller than me 🤷🏽‍♀️ @zacxak 📸

Just 15 weeks ago, she shared that there was nothing new to update. It looks like things are still going strong for them. You can see the post below.

No new changes to report

Don’t miss new episodes of Marrying Millions on Lifetime. You can catch a new episode every Wednesday night.

Todd Chrisley Shares The Truth In Marrying Someone ‘Just Like Your Mom’
Meri Brown’s Best Friend Jen Ends Up With Egg On Her Face
‘Temptation Island’ Erin Gets Smooch From Corey On Instagram
Did ‘Below Deck’ Alum Kate Chastain Go Under The Knife?
Tammy Slaton Spills Season 3 Tea: Is She In A Living Facility?