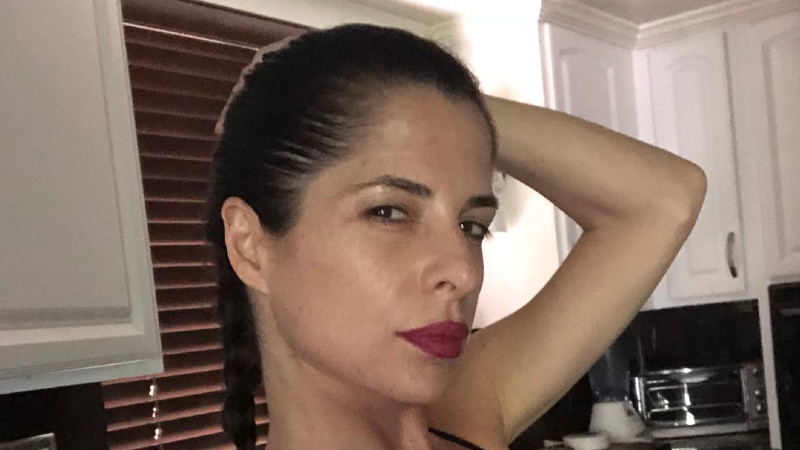 General Hospital fans noticed a familiar face on the episodes airing this week. Soap vet Kelly Monaco is back in her boots as Sam McCall on the ABC soap.

The actress had to step away from filming earlier this month. She was off-screen for a handful of episodes. Passions alum Lindsay Hartley graciously took on the role as a temporary fill-in.

Many fans found Lindsay a breath of fresh air.

Now Kelly is speaking out about her gratitude for the fans of the soap and for Lindsay herself.

When news broke that Kelly was taking a brief leave from the show, fans were rightfully concerned. They flooded her mom’s social media with questions about Kelly’s health. Kelly’s mother took to Twitter to let fans know the situation.

Reportedly, the face mask required for coronavirus production gave Kelly breathing problems on the set of GH. Despite testing negative, she was sent home to quarantine for 14 days. The concern from the fans wasn’t lost on Kelly.

She took to her Twitter account hours before Wednesday’s episode to thank fans for their “love and support.” She writes that she feels “blessed, grateful and humbled” for her soap career with ABC.

I must thank the amazing #GH fans for all of the love and support they have shown me in the past couple of weeks. It’s been a crazy year and I feel so blessed, grateful and humbled to be able to continue to do what I love… 20yrs and counting with @ABC.. what an honor!!! 🤗 pic.twitter.com/lBDvuKQOL8

Michael Fairman notes on his website, MichaelFairmanTV, that Kelly has been with ABC for 20 years now. She got her started on Port Charles before moving over to General Hospital. Kelly has played Sam McCall on GH since 2003.

The actress was also on the first season of ABC’s Dancing With The Stars, winning the Mirrorball Trophy. She was also part of DWTS All-Stars Season 15.

GH Actress Thanks Lindsay for Filling In

In a separate tweet, Kelly gave Lindsay a “huge shout out” for taking over the role of Sam, at least temporarily. Kelly writes that Lindsay “kicked a**” as Sam.

Fans agree. Many fans thought that Lindsay did a better job, noting that the actress was “more present” in the role than Kelly is.

While Kelly would prefer to keep her role, she agrees GH should create a role for Lindsay. The former Playboy model retweeted a fan’s tweet about bringing Lindsay back as Sam’s “long lost twin sister.”

I absolutely agree @L_Hartley did the damn thing🤩…Sam needs a long lost twin sister😉😉 Love y'all both. #GH #WomenSupportingWomen

For her part, Lindsay seemed to really enjoy being back on soaps. She retweeted several complimentary articles from fans and media outlets. On several of the retweets, she mentioned her love of the soap genre.

The Days of Our Lives alum wrote a short thank you to ABC for choosing her for a temporary fill-in. She thanks General Hospital for the “fortunate experience” of playing Sam McCall. Lindsay further notes that she is grateful for the opportunity “during this moment in time.”

Thank you @generalhospitalabc for the fortunate experience to play Sam, and especially during this moment in time. 🙏🏻 It was a fun ride. 💜

Soap fans are hoping to see more of Lindsay Hartley in front of the camera. She is expanding her resume to include directing.

Will you miss Lindsay as Sam or are you glad Kelly is back ‘home’?

General Hospital airs weekdays on NBC. Follow us on social media for the latest television news!