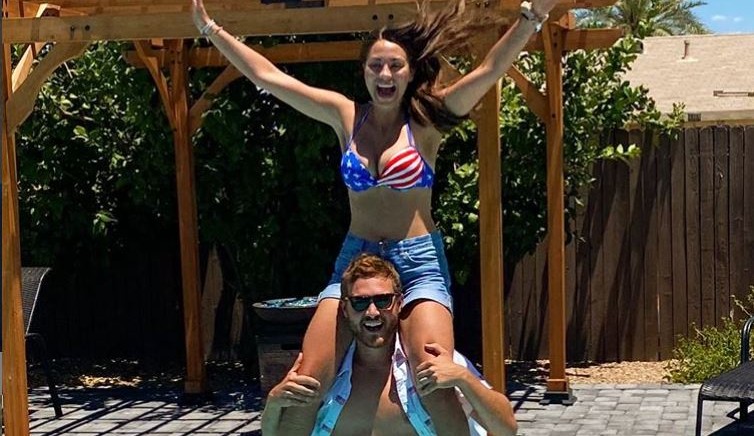 It was a long dramatic road, but The Bachelor Peter Weber finally found who he was supposed to be with. In fact, it turns out he actually didn’t even have to go on the reality television show to find her. Peter met Kelley before filming ever began. He met her randomly in a hotel lobby. It was that meeting that led her to agree to be on the show. She felt it was fate. And, it turns out it was.

Former Bachelor Peter shared a video that has not been seen by most. The video is from the night he met Kelley while attending a wedding. On the video, Peter said, “A year ago today I met this one in a hotel lobby. We danced the night away and then went our separate ways. I truly didn’t know if I’d see her again. This life is beautiful, beautiful. Let’s see what’s next ❤️.”

He also shared a screenshot of a text she sent to her best friend. It said, “Jackie. I can’t believe this. I don’t know what god is trying to say here.” She continued, “I have so much to tell you but you cannot say a word to anyone.”

Many expressed happy thoughts about Peter’s post. His mom has been one of Kelley’s biggest supporters from the beginning. She commented, “I’ve said this before and I will say it again… SERENDIPITY.”

A year ago today I met this one in a hotel lobby. We danced the night away and then went our separate ways. I truly didn’t know if I’d see her again. This life is beautiful, beautiful. Let’s see what’s next ❤️ @kelleyflanagan

While on the show, Peter sent Kelley home the week before hometowns. He now knows he made a mistake. The two finally went public with their new love in May. Since then, they have been inseparable. They have spent time in Chicago and also time at Peter’s parent’s in California.

And, they are already planning on taking a bigger leap and moving in together this fall. Peter recently had a birthday and was showered with love from his family, including Kelley. She posted a cute photo and said, “Happy early birthday to the kindest soul on this planet! Love you.” Kelley He responded to her saying, “Love you Kell Bell.”

It took sorting through relationships with four other women to figure out Kelley was who he needed to be with. He even proposed to Hannah Ann Sluss, but later broke her heart realizing he wasn’t over Madison Prewett. There was also Victoria Fuller and Kelsey Weier in his final four that he sent home as well.

Regardless of how he got there, Peter found a good match. He and Kelley are truly happy and in love.