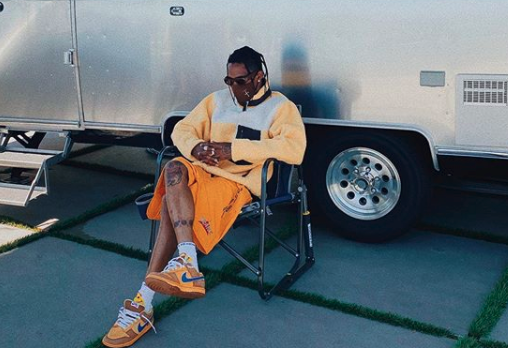 Travis Scott, the baby daddy for Kylie Jenner, is revealing some things in a recent interview. He’s talking about what he thinks of Kanye West.

In a recent interview with GQ, Travis Scott is revealing a lot of his feelings. Especially those on recent events happening in America.

It sounds like Travis is really just trying to be an advocate for change during these trying times.

Of course, Travis had to touch on Kanye West. Kanye has been recently trying to run for president. He is known for his swiftly changing political views. However, before that, he was Travis Scott’s mentor.

We made a bond to neva forget !

Kanye and Travis actually just released a song together. The song may be the most political song that Travis Scott has ever been apart of. Of course, people are wondering if Travis has said anything to Kanye about recent events. Travis says that he has. He even called Travis is ‘big bro.’

“Everyone’s entitled to their own [opinion]. I just tell him how I feel. How people feel about this s**t.”

During his lengthy interview with GQ, Travis Scott apparently refused to talk about Stormi or his relationship with Kylie Jenner. Of course, that’s a bit disappointing to Kylie and Travis fans who want to know what has been going on with the two of them. However, there have been rumors that the two are back together.

The two of them were even seen sharing a hotel room a source reports.

“I saw Travis and Kylie at the Rosewood Miramar Beach hotel on Friday. They left on Saturday. They were in the hotel room the whole time. The nanny and the bodyguard brought Stormi out to the beach, but apart from that they never left the room,” they said.

With the KarJenner family, there is just no telling who is together and who isn’t.

Do you want to see Kylie Jenner and Travis Scott together? Let us know what you think in the comments. Come back to TV Shows Ace for more news on all of your favorite reality TV stars.