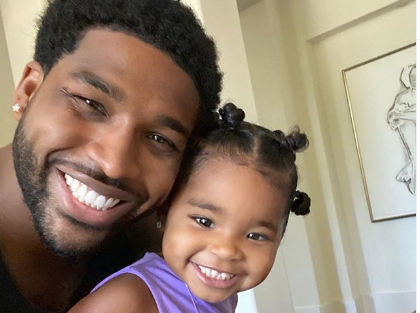 Kimberly Alexander has said in the past, her six-year-old son belongs to Tristan Thompson. Tristan took a DNA test and said the results showed he wasn’t the father.  Alexander thinks it should be done again in a neutral setting because she found it suspect.

She still maintains he is the father. Tristan did sue Kimberly and accused her of having a reason to lie and say the boy belonged to him. He sighted her multiple evictions as just one piece of evidence her motive was to get money from the basketball star. In another Instagram post, Kimberly posted a quote that said, “my goal is to be rich, not look rich.” Tristan filed a lawsuit and let her know he’d sue her if she kept saying he was the father.

The photo Kimberly Alexander shared of her son on Instagram had fans saying, he looked like Tristan Thompson. In the video the cute six-year-old and his mom stick their tongues out. She captioned it, “I’ve got this one here.” One fan said, “he looks like a light-skinned version of Tristan.”

One fan said, “he looks like his sister, True.” That fan, of course, is speaking of Khloe Kardashian’s daughter with Thompson. According to The Blast Kimberly went to court to stop a default from being entered on the case. She’s looking for a lawyer to work pro bono. When asked if she’d ever spoke to Khloe, she said she had not.

I’m wise enough now to know, you came into my life to show me just what it means to be an incredible person. I appreciate how I am able to learn from and grow because of you. I thank God for the beautiful and loving woman you are to everyone, especially our daughter True. You deserve the world Koko! True and I love you mama. Happy Birthday @khloekardashian ❤️🥳

Kimberly Just Wants Him To Take A Second DNA Test

She posted a video of a guy on YouTube talking about the story. He was saying it threw a wrench in the reunion between Khloe and Tristan Thompson. Since the two of them have recently gotten back together and are working on their relationship.

In the video the guy says Tristan filed for a default judgment against Kimberly. He wanted the suit ruled in his favor since he claimed she never responded to the lawsuit. Kimberly captioned it, “why on the next day file a default? Seems to me that if u ain’t got s*** to hide just take a second DNA that I choose.” She went on to say him denying her choices for where to get the test is crazy. Kimberly said she couldn’t do anything to the tests, so it doesn’t make any sense.

Kimberly recently set up an Only Fans account to make money.  She charges ten dollars for fans who want to see exclusive content. She might save the money up to get a lawyer and fight for her rights in court. Fans will stay tuned to see how this drama finally shakes out.