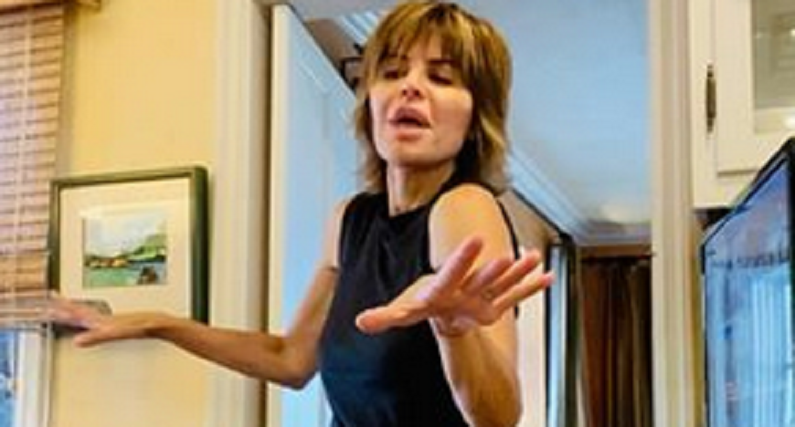 Lisa Rinna let loose in her latest dance video. As RHOBH fans know, the reality star loves to post videos of herself dancing to hit music. Garcelle Beauvais slammed her for her social media posts. But the 57-year-old keeps dancing regardless of what people say. And she doesn’t care who’s watching.

The Real Housewives of Beverly Hills star took to Instagram to share a new video that’s a bit revealing. It features Rinna wearing a black leotard and dancing to Cardi B and Megan Thee Stallion’s hit song “WAP.” The new song has become popular among women since it promotes female sensuality.

But it wasn’t the lyrics that had fans up in arms. It was Rinna’s dancing that was too much for them.

As per The Blast, Lisa Rinna posted of herself dancing to a “WAP” mash-up, which included celebrity stylist Brad Goreski. On Monday, August 17, she posted the video that had fans clutching their pearls. Brad joined Rinna as part of the #WAPChallenge, a viral dance challenge inspired by Cardi B’s hit song.

The clip cuts over to Rinna who walks around in nothing but a leotard. She proactively spread her legs wide for the camera. Then she gyrates her body up and down on the floor. The former Days of Our Lives actress shocked her followers with the racy video.

Rinna had an idea she would get this reaction, but she didn’t care. She loves to get a rise out of her followers. Unfortunately, Rinna has since deleted the video.

“I’m getting killed for this,” she captioned the post before deleting it.

But she removed it when her comments section was filled with people who didn’t like the revealing video. Some of the RHOBH fans slammed her for showing her “crotch.”

“Lisa, you’re a great dancer but the crotch shot is not something I want to see!” one follower wrote.

“This is too much,” a third follower wrote.

Not all of the comments were bad, however. Although Rinna removed the video, she did receive positive action from her own fans. But there were too many trolls who kept talking about her nether regions.

Is she firing back at Garcelle Beauvais?

The revealing video comes after her co-star Garcelle Beauvais commented on her infamous dancing videos. On a recent episode of RHOBH, she suggested that Lisa Rinna’s videos could affect her daughter Amelia Hamlin’s “body image issues.” Everyone knows that Lisa Rinna doesn’t like it when people mention her family.

RHOBH fans were shocked when Garcelle mentioned Rinna’s clips. Amelia has been open about her struggles with her eating disorder since she first announced it in 2018. Rinna has responded to Garcelle with several jabs on social media. She even re-posted a video of Amelia dancing around in her underwear.