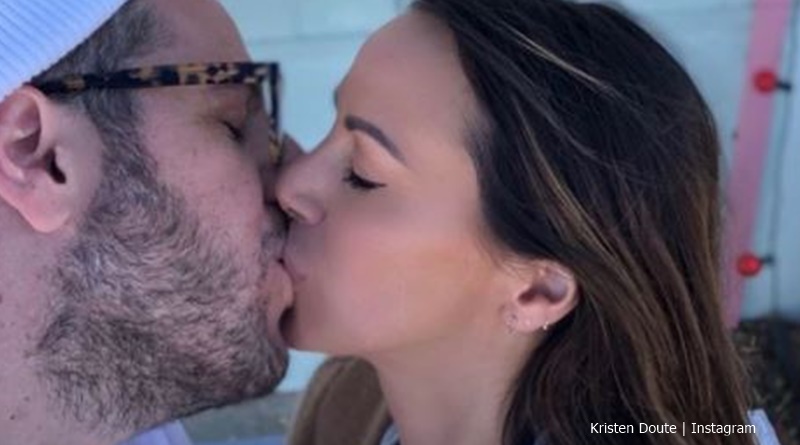 Kristen Doute and Alex Menache spent a lot of time in the pool this weekend. In fact, we reported that she shared a photo of something that looked like a pregnancy test But, it turned out to be bug bite relief. On Monday, they returned to the pool. Actually, they looked so happy that some fans of Vanderpump Rules think she’s better off without Bravo.

Kristen shared a photo of their sparkling blue pool. She clung to Alex in the water, and wrote, “is man crush monday still a thing? I crushed him in H-O-R-S-E.” Loads of fans noticed her radiant happiness. Of course, a lot them still wish that Kristen could return to the Bravo show. One fan wrote, “I’m not watching VPR without you and Stassi.”

Another fan noted, “I can’t watch The show without u two. It’s going to boring! They’re taking this [too] far! Bravo.” Then, a Kristen Doute fan wrote, “Wish you and Stassi were back on Vanderpump. Stassi storyline would be Having a Baby. And your storyline would be Love at Last. It would be the best season. With real reality. I miss you guys. All the originals made this show. Without the same gang it’s not the same. BRAVO and Andy bring them back. Please. 🙏❤️✝️🙏.”

Some fan think Kristen’s way better off without Bravo

While fans miss Kristen in VPR, some fans agree she probably does better without the publicity of the show. One person noted, ” as much as I love watching them on the show, I think they might be better off without Bravo and all the toxicity that came with being on air. They both look genuinely happy, and they don’t have to share that with the whole world.”

In fact, their obvious happiness got a lot of likes and comments from fans. One said, “Happy looks good on you. ❤️.” Another one commented, “We love a happy Kristen 😍💕.” If you don’t recall, CNN reported in early June that Stassi and Kristen Doute got fired from Bravo. “The firings come after Faith Stowers…[accused] them of “racist actions against her.”

is man crush monday still a thing? I crushed him in H-O-R-S-E

Ironically, Faith only featured occasionally on the show, but she managed to take down some longtimers. In a firing frenzy, Bravo also dumped Max Boyens and Brett Caprioni. For a long time, Jax and Brittany also looked in line for the ax. But so far, it seems they escaped. However, those two Vanderpump Rules stars are not stupid and they probably made some contingency plans.

What do you think about Kristen Doute and Alex looking so happy these days, Do you agree they might be better off without Bravo? Sound off in the comments below.