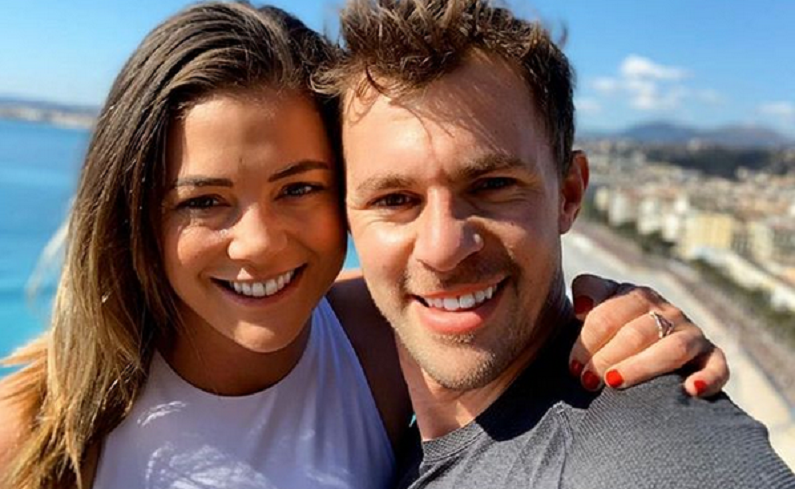 Below Deck Med newbie Tom Checketts already had a breakdown. The first day wasn’t the greatest one for him. He’s already feeling the heat after his latest dinner disaster. Tom had a hard time keeping it together on Monday night’s episode.

TV Shows Ace already reported about Tom’s impending meltdown. He had a rough time getting started in the galley. It got so bad that his girlfriend, bosun Malia White, had to help him out. First, he dealt with a broken spatula. Then he had to shuck oysters without an oyster shucker.

He got even more frustrated when a last-minute birthday cake request is made. That’s when he tells Malia he made a “big mistake” joining the yacht.

The viewers immediately took to Twitter to share their thoughts on the new chef from the UK, Tom Checketts. Below Deck Mediterranean fans are still missing chef Hindrigo “Kiko” Lorran, who was a breath of fresh air. His positive behavior is rare among yacht chefs. Even though he ran into issues in the galley, never once did he have a meltdown.

Kiko was under extreme pressure from Captain Sandy Yawn. But that didn’t stop him. Alas, the two couldn’t see eye-to-eye and she had to let him go. Malia’s boyfriend was coming to visit her. He was in town to visit a sick relative. But once Sandy heard that he was a chef, she wanted him on board.

Let’s all wait and see how sandy treats Tom now that he is messing up .. #BelowDeckMed #BelowDeckMediterranean

So happy to see Tom can’t handle the job. Yeah, it’s a tough gig. But you know who could handle it, KIKO!! #BelowDeckMed #Bravo

She held an impromptu job interview and gave him the job on the spot, which he accepted. Now, Tom is wondering what he got himself to. Below Deck Med fans took to Twitter to share their thoughts on Tom’s explosive behavior in the galley. He quickly loses his cool during dinner.

“Tom is freaking out about a cake?” one user tweeted.

“In the time that Tom spent b****ing, he easily could’ve made and ‘cooled’ a cake,” a second viewer wrote.

“Oh Tom bout to snap. Bet they wish there was Valium on the boat now,” one viewer joked.

“Tom’s a little bit of a whiner for the first day of the charter,” a Twitter user said.

Fans are not feeling Tom. He already made a terrible first impression. What also doesn’t help is that he’s dating Malia.

Chef Tom is already burned out on the first day

Tom Checketts told Malia White that he learned about the birthday cake request 30 minutes ago. He had 3 hours until dinner to make the cake. Christine “Bugsy” Drake delivered the request to Tom, and he immediately vents to Malia. He worries that his cake won’t be ready on time and shares this with the newly appointed chief stew.

Then he takes the drama to his shared cabin with Malia. He tells her that the request is “bulls***.” He’s not sure if he can make a “f***ing birthday cake last minute.” Tom spends most of his time whining rather than making food.

Dinner service doesn’t go well. The charter guests claim that their oysters have shells in them. Then the lobster comes back as “too raw,” when Tom really loses his cool. He begins to curse as he scrambles around the galley.

Is there already fresh trouble in the galley? 🍳

He immediately gets flustered. The freelance chef searches for a potato, but the only potatoes he finds are raw. He takes Malia aside again and vents to her. “This is bull*** and suicide,” he tells her behind a closed door.

Malia reminds him how well lunch went, but he doesn’t want to hear it. “I”m good at what I do,” he exclaims. “I don’t need to prove it. I’ve made a f***ing big mistake. I’ve got way too much self-respect to do this.”

The preview for Below Deck Med shows Tom crumbling as the season goes on. In future episodes, he tells Sandy to get out of the kitchen. Meanwhile, Malia is concerned that he’s going to quit on the spot. Sandy also confronts him about his frozen fish. She has no choice but to walk away.

Wait, What? Does Isabel Roloff Plan To Raise Her Baby In A Van?
No Longer Boy Crazy? Scheana Shay Gets The Life She Wants
‘B&B’ Spoilers: Mystery Woman Crashes Steffy And Finn’s Wedding?
‘The Young & The Restless’ Spoilers, July 26-30, 2021: Phyllis Gets The Goods, Sally Panics
‘Dexter’ Revival: Release Date, Cast, What We Know So Far