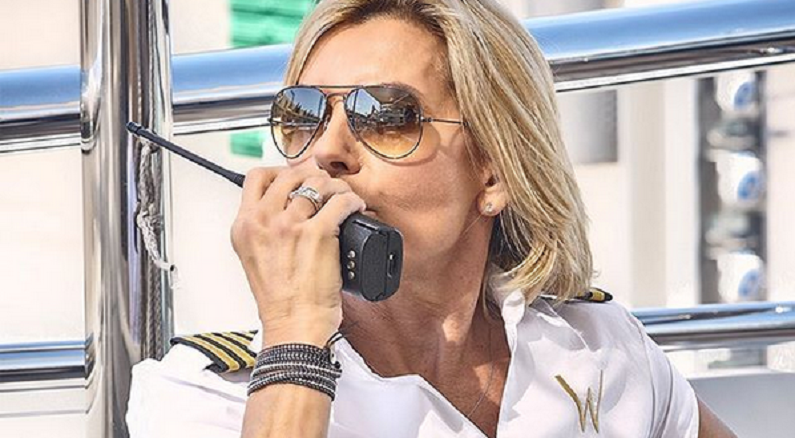 Below Deck Med star Captain Sandy Yawn followed Hannah Ferrier onto the dock shortly after firing her for having CBD and Valium on board. Viewers wanted to know why Sandy was hovering over Hannah. She claims that she did it out of compassion. The micromanager also revealed in Monday night’s episode that she cared about Hannah.

She had a difficult time with the termination. Sandy was so distraught that she revealed to Christina “Bugsy” Drake that she wanted to leave the boat that morning. On the Below Deck Med After Show, Sandy explained why she wanted to follow Hannah after firing her. And it’s not because she made sure the chief stewardess left the boat.

Below Deck Med star reveals why she followed Hannah around

Captain Sandy Yawn from Below Deck Mediterranean pursued Hannah Ferrier for a good reason. Viewers didn’t like the way she treated Hannah. They felt that she was hovering when Hannah just wanted to go. It’s bad enough that Sandy got slammed for her micromanaging this season.

“When I walked onto that deck to see Hannah it came from a place of compassion,” Captain Sandy said on the Below Deck Med After Show. “When you invest in people, and you spend four seasons with someone, of course, it’s difficult. It’s not easy.”

She chalked the firing up to a huge loss. Even though Sandy didn’t want to do it, she knew she had to. In that scene, Sandy explained to Hannah that going to sea would be a safety hazard. But Hannah was clearly over it and wanted Sandy to leave her alone. Viewers empathized with her during that painful scene.

Sandy wanted Hannah to know that her hands were tied. She also claims that the firing wasn’t personal and there’s no bad blood between them.

“I didn’t do this to her,” Sandy explained. “The one thing that I said I will never lose because I felt that a lot of the corporate people that I worked for, they’re just so focused on the next thing that they forget that you’ve got a human being sitting in front of you.”

The Below Deck Med star also explained the reason why she had to let Hannah go. As viewers know, the two had a difficult relationship since Season 2. But Sandy says she has to look out for the interest of the boat and its charter guests.

Hannah tweeted during the previous episode and said that the Valium that was found was a prescription. But the reality star was still in trouble. Every past and present member of the Below Deck franchise wanted to know the real reason why Sandy fired the Australian. But according to her, she did not fire Hannah for having prescription drugs on board.

“I let the stew go because I had to make a critical decision, which protects the vessel, the owner of the vessel, and my license,” she explained in her confessional.

She felt that she could no longer trust Hannah, especially with everything happening at sea. Viewers remember when Sandy received a photo of Hannah’s purse that contained a CBD pen and the Valium prescription. Bosun Malia White sent Sandy the photo after she argued with Hannah over room arrangements. She wanted to bunk with her boyfriend, Tom Checketts, who is the new chef on board.

Malia got more than she bargained for. Not only did she get backlash for the decision, but she also got her boyfriend worked up in the galley over his job.