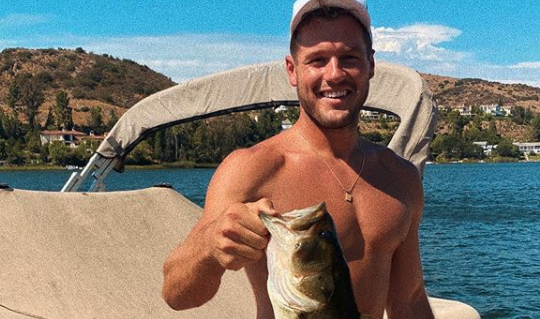 Bachelor alum, Dean Unglert is talking about Colton Underwood and Cassie Randolph. The pair split up not too long ago, and Dean has a unique opinion on the whole situation.

Dean Unglert is diving into Colton Underwood and Cassie Randolph’s relationship according to US Weekly. The star has a bit of insight since his girlfriend is close friends with Cassie. However, Dean says he actually avoids that topic. He does have one opinion though: he thinks they could both do better.

“I try to stay out of that with Caelynn. There’s one line in The Office where I think Jim and Pam started dating and Dwight says, ‘I think they both can do better.’ I think that kind of applies to Cassie and Colton,” Dean said. “I obviously want the best for them and I don’t know exactly what’s going on.”

Sounds like Dean thinks pretty highly of Colton and Cassie, just not as a couple. He’s probably right. They need to go find people that they really connect with.

swipe for a surprise

Dean and ‘The Bachelorette’

Colton and Cassie aren’t the only people Dean has been talking about. The Bachelor Nation alum also had something to say about the season of The Bachelorette. Apparently, he doesn’t really believe in the current story.

Right now it sounds like Clare Crawley left the show just 12 days into filming because she fell in love that quickly. Dean doesn’t seem to think this sounds very realistic. After all, Clare isn’t the first person to be certain about who she is going to pick in the end.

“I don’t understand why Clare could just be like, ‘Yep, this is the person I like. Let’s just cut me off now,’” Dean revealed. “There’s gotta be something else and I don’t know what it is. … It just seems a little fishy. It’s a little too convenient that Clare fell in love and 12 days and left the filming of the show just to pursue the relationship with this guy.”

Dean has a great point. It doesn’t make a ton of sense. Why wouldn’t she want to wait until the end? Only time will tell. Hopefully when the new season airs lots of questions will be answered.

Do you like Colton and Cassie together? Or, do you agree with the Bachelor star? Let us know what you think in the comments. Come back to TV Shows Ace for more news on all of your favorite members of Bachelor Nation.