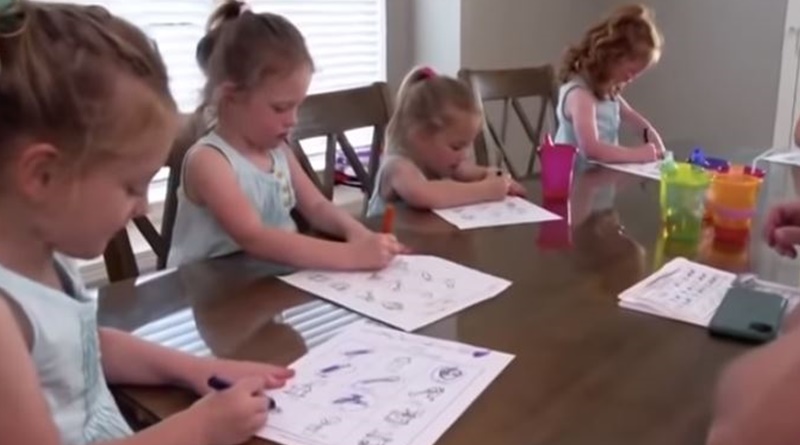 OutDaughtered fans heard from Danielle Busby about the quints starting Kindergarten. We reported that she shared a photo of them all lined up in “NICU shirts and graduation caps.” But, the time came along for them to choose their clothes for the first day at Kindergarten. And, the quints all chose the same Graeson Bee outfits!

On Sunday night, Danielle revealed the kids all get ready for their first day at Kindergarten. Danielle shared a photo of five little pairs of shoes and five frocks all lined up on the floor. Incredulously, she captioned her post with, “FIVE little dresses 👗 , TEN little shoes… I can’t believe my little girls will be off to their first day of school. 🏫 KINDERGARTEN TOMORROW!”

Next, the OutDaughtered mom asked, “What are your little ones wearing for their first day of school? The quints [rock] their favorite long twirl dress from @graesonbee!” Actually, Danelle picked out something different.” But, “they all insisted on wearing this Grace & Vine Floral dress….🤷🏻‍♀️.”

One of the first questions that popped up on Danielle’s post involved Riley. After all, fans know that she skipped ahead of the other quints as she’s very bright. Now, fans wonder if they keep her back to repeat a year instead of going into first grade. That’s despite the fact that her teacher said Riley did really well in her class.

One OutDaughtered fan asked, “What about Riley?” In fact, Meaww noted in Season 7 that Adam and Danielle prepped the kids for school. In June, they noted, “Riley happened to[do] better than her sisters. They added, “this led to her teacher [promoting] her before the others.” However,  fans wondered if she stays in an advanced class

FIVE little dresses 👗 ,TEN little shoes… I can’t believe my little girls will be off to their first day of school. 🏫 KINDERGARTEN TOMORROW! *What are your little ones wearing for their first day of school? The quints are rocking their favorite long twirl dress from @graesonbee ! I had something totally different picked out for each of them but they all insisted on wearing this Grace & Vine Floral dress….🤷🏻‍♀️ so long floral dress it is ✔️ 😘 (Be sure to checkout @graesonbee END OF SUMMER SALEit’s been extended #yay 50-70% markdowns 😱) #onlineshopping #twirldress #kindergarten #firstdayoutfit #graesonbeeboutique #graesonbee #itsabuzzworld #busbyquints

We noted in our article that Riley repeats Kindergarten. And, it seems like a dead certain possibility. We wrote, “Danielle Busby has all five girls registered for kindergarten. Fans thought Riley already attended Kindergarten.” However, she just went into an advanced class “to keep her occupied.”

We also explained the OutDaughtered parents kept “all five girls together as they start out in public education.” That’s despite in the last season, Danielle saying they only homeschooled all the kids the same class because it’s too difficult to do a separate class for Riley.

One OutDaughtered fan confirmed, that she goes “back into kindergarten. The pre-school she went to is private and [not] recognized by the public school system [as a] completed grade.” That makes a lot of sense.

Did you know Riley got held back with her sisters? It makes sense that they all start at the same level in their new public school. Perhaps Riley moves ahead again in the future.