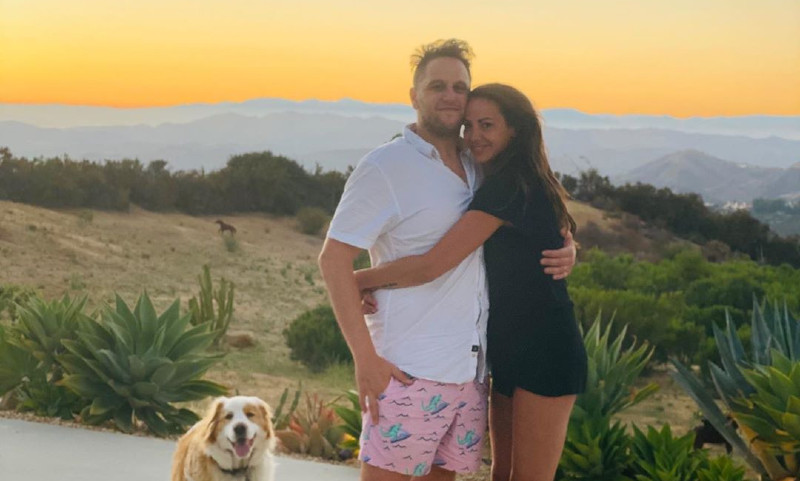 Baby fever is sweeping the stars of Vanderpump Rules. It’s so contagious that even fans are seeing signs of pregnancy everywhere. Last month, fans thought Lala Kent was pregnant because she wore a tracksuit.

Fans constantly analyze anything Brittany Cartwright posts for the hint of a baby bump.

Kristen Doute Holds What Looks Like a Pregnancy Test

While Kristen’s friends were living it up on Lake Mead, the former Pump Rules star was at home with her boyfriend. Kristen began dating Alex Menache earlier this year. She spoke out in April about hoping to have children someday, regardless of whether she was in a relationship.

Kristen shared a series of videos over the weekend that raised the pregnancy alarm among fans. In one video, Kristen waves what at first glance appears to be a pregnancy test.

But it was a false alarm.

Other videos reveal the truth. The couple spent the weekend cleaning her pool filter, resulting in bug bites. Kristen was simply showing a device that provides relief for bug bites. She was promoting the product in the posts.

Several of the group from Pump Rules spent the weekend with Randall Emmett on Lake Mead. Stassi Schroeder, Beau Clark, Jax Taylor and Brittany Cartwright joined Lala and Randall on the mini vacay. Katie Maloney-Schwartz and Tom Schwartz were there as well, a day after Katie’s new You’re Gonna Love Me podcast dropped.

The group first took Randall’s private jet to Vegas. From there, they hopped on Randall’s boathouse before camping on the shore of Lake Mead.

Kristen and her boyfriend weren’t there for whatever reason, but that doesn’t mean she had another falling out with them. Jax and Brittany just came home from Kentucky last week. Shortly after arriving back in L.A., the couple hosted a ‘fam dinner,’ which Kristen DID attend, per The Blast.

Brittany Posts Selfie From Lake Mead, Fans Think She Has a Pregnancy Glow

Pump Rules fans are obsessed over which star will get pregnant next. As fans know, Stassi is having a baby in January. She shared a photo of her growing baby bump while on vacation.

Brittany posted an innocent photo of her smiling with the lake behind her. The photo doesn’t show her midriff or really much of her body. But still, several fans took to the comments to respond that she has that pregnancy glow. Brittany never responded to the comments.

In fact, it’s rare that fans were able to comment at all. Brittany usually disables comments when she posts on Instagram.

Bravo has yet to announce if Vanderpump Rules will be back for Season 9. One thing’s for sure – Stassi and Kristen won’t be back if the show returns. They were fired in June for their past racially insensitive behavior.

‘The Grand Tour: Lochland’ Released, Will Covid Derail Next Season?
‘LPBW’ Tough Jackson Roloff Shows Dad What He Is Made Of
TLC: ‘Say Yes To The Dress’ Meets ‘Seeking Sister Wife’ In New Episode?
Love In The Afternoon With Hallmark’s ‘A Little Daytime Drama’
‘Seeking Sister Wife’ Garrick Merrifield All Smiles Out With Dannielle’s Family