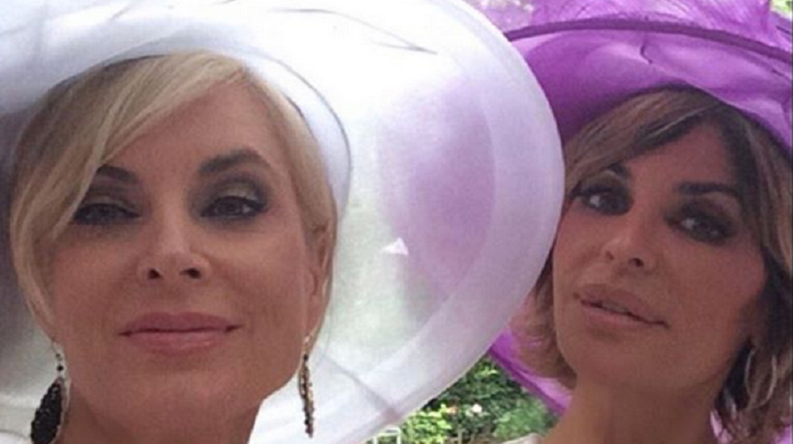 Lisa Rinna is posting more cryptic messages on social media. The RHOBH star fired back on Instagram Stories over the weekend. Some fans assumed she was talking about Denise Richards.

However, it happened on more than one occasion. She cracked a joke about getting a “cease and desist” letter, alluding to the RHOBH Season 10 reunion. Prior to that, Rinna wanted to know if Denise was “wasted” during her at-home confessional on Wednesday’s episode.

Find out what Rinna has to say now about the show now. It appears that she has some doubts but still defends her behavior.

On Sunday, August 16, Lisa Rinna was on a roll on Instagram Stories. She shared several funny posts and memes. But there’s one post that stood out. In her latest cryptic message, Rinna raised her doubts about being on The Real Housewives of Beverly Hills. But then she turned it around and added that everything she does on the show “becomes iconic,” as if she was defending her recent actions.

“I think it’s so funny how every season the show tries to take away or ruin or taint something that I love or brings me great joy,” Rinna wrote. “What ends up happening is it becomes iconic.”

Rinna included a bitmoji of herself blowing her followers a kiss. While Rinna has never been a hit with fans, she’s receiving backlash for her actions on Season 10 of RHOBH. Fans don’t like the way she handled Brandi Glanville’s claims about her alleged affair with Denise Richards.

They also don’t like the way she’s treated her longtime friend. Wednesday night’s episode showed the two hashing out their differences and repairing their friendship. Rinna broke down and cried as Denise confronted her. It was a different side to Rinna that some haven’t seen before. But some fans feel that she was acting during that scene.

Will she return to RHOBH Season 11?

Lisa Rinna previously said that she doesn’t believe Denise will return for Season 11. However, Garcelle Beauvais admits that she’s “scared” to return to the show. In her latest interview, she revealed that Rinna issued a stern warning about returning for a second season during the taping of their virtual reunion.

During her appearance on SiriusXM’s Entertainment Weekly Live, Garcelle shared what Rinna told her about her potential season. The Coming to America star also revealed that she and Denise wouldn’t return without each other. She is also confirming that Brandi wasn’t the only cast member who received a cease and desist letter.

Lisa Rinna giving Garcelle a “warning” if she’s signs on for her second season 😳🧐 #RHOBH pic.twitter.com/Lmg2WaCnjL

“At the reunion, actually, Rinna said, ‘Your first season is always nice and pleasant and the second one, they come for you.’ And I said, ‘Is that a warning?’ She goes, ‘Yes!'” Garcelle said, as per Reality Blurb. “So, I’m a little scared. I’m a little scared.”

Then Garcelle shared her thoughts about returning to RHOBH for the upcoming season. She said that she discussed it with Denise and both have decided not to return unless the other returns as well. Garcelle and Rinna had a falling out after the reunion and haven’t made up since.

Regardless of how Lisa Rinna feels about the show, it’s clear that she’ll return for the next season.