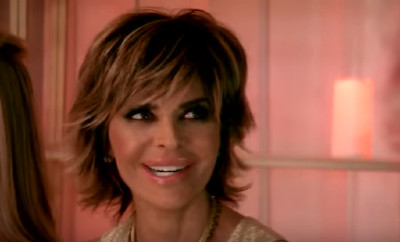 The Real Housewives of Beverly Hills star Lisa Rinna is not here for fans to talk about her husband. The actress clapped back at the gossip that Harry Hamlin doesn’t live with her. Some RHOBH fans think that the couple is actually separated but keeping it a secret.

For the first time, Lisa is addressing the rumors. And it’s in classic Lisa Rinna fashion. On Instagram Stories with a quip.

How the Rumor Started in the First Place

The rumor about Harry and the RHOBH star’s marriage took off on social media after Season 10 began airing earlier this year. In one episode, Harry says something about his daughters wanting to “come over” for dinner. Some fans took that slip of the tongue and ran with it.

RHOBH fans asked why Amelia and Delilah would have to “come over” when they all lived together? Fans took the off-handed comment as confirmation that Lisa and Harry were separated.

Some fans even think that Harry is gay. This is likely due to him playing a gay character in a movie in the early 1980s. He has been very vocal in recent years that the role ruined his acting career. However, he went on to star in NBC’s L.A. Law. In fact, he was named People’s Sexiest Man Alive during his time on the legal drama.

So, the rumor that Harry is gay and doesn’t live with Lisa Rinna is going around social media.

RHOBH Star Claps Back at Rumor

Lisa Rinna got wind of the rumors about her husband circling the ‘net. She took to, where else, her Instagram Stories to respond to the slander. As RHOBH fans know, Lisa loves to post dancing videos on her Instagram. In fact, her co-star, Garcelle Beauvais, recently landed in hot water after implying the videos contributed to Lisa’s daughter’s eating disorder.

Taking to her Instagram Stories, Lisa addresses the rumors. She writes, “The trolls don’t think Harry lives here and they think he’s gay.”

The RHOBH star had a two-word response to those trolls: “You wish.” She threw in a kissing emoji for the haters.

The Days of Our Lives alum actually has a lot of haters this season. RHOBH fans are not happy with her for attacking supposed friend and co-star Denise Richards. This comes after Season 9 and Lisa’s part in Puppygate. Remember, Lisa is the one who convinced Kyle Richards and Dorit Kemsley that Lisa Vanderpump DID leak a story about the situation to the press. A claim that Lisa Vanderpump still denies, but ended her friendship with Dorit and Kyle over.

The current season of RHOBH focuses mostly on Denise’s alleged affair with Brandi Glanville. An affair that Denise denies, but Lisa Rinna seems determined to get everyone to believe Brandi.

During a recent episode, Lisa apologized to Denise for being a bad friend, complete with waterworks. The Blast reports that fans weren’t buying Lisa’s “crocodile tears.”

While the friends seemingly made up in the August 12 episode, something clearly happens to end their friendship by the end of the season.

Fans will have to tune in to RHOBH to find out how it all goes down. Tell us your thoughts on the rumors about Harry in the comments.

Kourtney Kardashian Spills Details On Sweaty Date Night With Travis Barker
‘When Calls The Heart’ Season 9 Has Started Filming: All The Details
‘Love Island USA’: Aimee Flores Refuses To Give Her Cookie To Any Man
‘Love After Lockup’ Spoilers: WAIT! Doug Cheated On Rachel The Whole Time?
Josh Duggar Prohibited By Court From Seeing His Sister Jessa’s New Baby