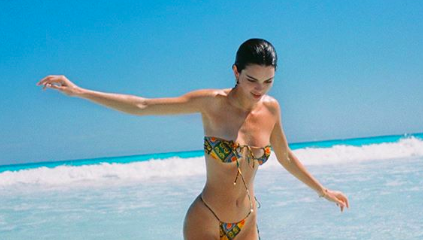 Kendall Jenner, Kylie Jenner and Devin Booker were all seen out together. This comes after romantic rumors of Devin and Kendall started.

Kendall, Kylie and Devin were all seen out getting Nobu according to E!. It would seem the three may have been celebrating Kylie’s recent birthday. Of course, the three of them were effortlessly gorgeous. Kylie could even seen sporting what appeared to be a Skims mask.

Kendall and Devin sparked rumors just a few months ago and this is fueling them even more. Of course, it would seem Kendall has a thing for NBA stars. The pair were spotted getting cozy on Memorial Day, and this dinner would make it seem like they are still going strong.

“She and Devin have a lot of mutual friends,” a source reported back in May. “They’re just friends for now but you never know with Kendall.”

If they are still just friends, they must be pretty close friends by now. At least it would seem that he has Kylie’s approval.

Kardashian family and the NBA

Of course, Kendall isn’t the only one with a (rumored) boyfriend in the NBA. Khloe Kardashian has also recently rekindled her relationship with ex-boyfriend, Tristan Thompson. Khloe and Tristan broke up last year when he cheated on her with family friend, Jordyn Woods.

Apparently, they are trying their relationship again and Khloe is hoping that it goes better this time. They have even said that they wouldn’t mind trying to give True a sibling. While that would be cute, hopefully they give the relationship a bit more time. Especially since Tristan will start work again soon. When he does that, he will be traveling and hanging around people who may be a bad influence. With Tristan, you never know what’s next.

“Tristan’s traveling was always a concern. This is when he would mess up their relationship,” a source said about the couple. “She hopes that Tristan has changed though so they can continue to be together as a family.”

At the end of the day, hopefully Khloe and Tristan are able to permanently work things out for their daughter.

What do you think of the Jenner and Kardashian sisters always dating NBA players? Do you think Kendall and Devin are together? Let us know your thoughts in the comments. Come back to TV Shows Ace for more news on all of your favorite Kardashian family members and reality TV stars.