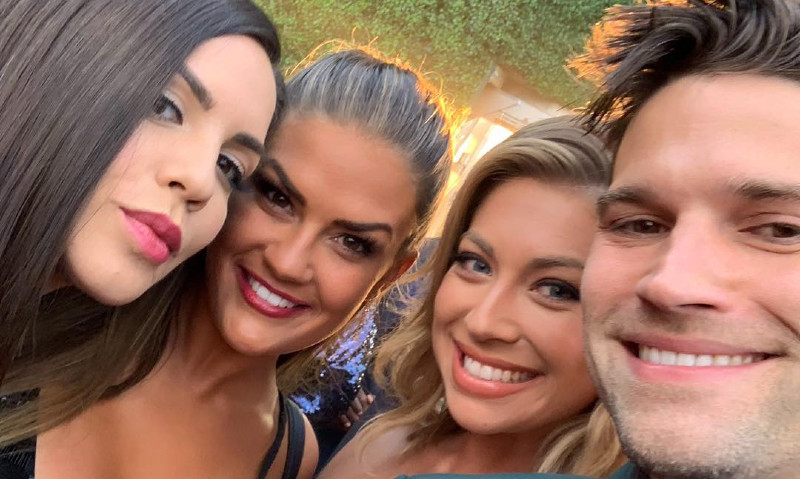 Some of the Vanderpump Rules stars are living their best lives. Thanks to their connection to hotshot Hollywood producer Randall Emmett. As fans know, Randall’s fiance is their co-star Lala Kent. Randall himself finally made appearances on Season 8 of the Bravo show.

During his Pump Rules appearances, fans learned of his growing friendship with the stars of the show, particularly Jax Taylor. Some fans do feel that Jax and Friends use Randall for the perks. One perk being a private jet.

This weekend, Randall flew some of his Pump Rules co-stars to Las Vegas on his private jet. From there, the group went to Randall’s houseboat in nearby Lake Mead, Us Weekly reports. Everyone in the outing is posting videos and photos to their respective Instagram accounts.

Jax Taylor, Brittany Cartwright, Tom Schwartz and Katie Maloney-Schwartz join Randall and Lala on the trip. Beau Clark, Stassi Schroeder and her baby bump are also enjoying the vacation before their baby comes in January. Stassi shared a snapshot of her growing baby bump while posing in a pink bikini.

Brittany doesn’t post much on social media after fans began calling for Jax to lose his Pump Rules gig. She does, however, post a lot to Instagram Stories, where fans can’t leave comments. The group trip to Lake Mead is no exception. Brittany posted several videos on her IG Stories. Some of the snaps included making ‘smores over the fire, some of the guys riding JetSkis and Jax strolling the beach for firewood.

It seems that anyone who wanted a turn at steering the boat got a chance. Both Katie and Beau posted videos of themselves driving the boat on their respective IG Stories.

Beau additionally shared a photo of the receding water level of Lake Mead. In the photo, he notes that it seems the Lake has lost several feet of water compared to where the water level used to reach.

The group appeared to stay on the beach well into the night. Brittany posted a video of her friends surrounding a bonfire. The other Pump Rules stars shared the same video on their own Instagram Stories, tagging Brittany.

There were, however, some people missing from the group. It appears that neither Scheana Shay or Tom Sandoval got an invite. While Kristen Doute has hung out with Stassi several times since getting fired from Bravo, she wasn’t in attendance on Randall’s houseboat.

Tom Sandoval’s absence indicates that he has yet to repair his friendship with Jax. As fans know, the longtime friends had a horrible falling out during Season 8. In the final episode, they decided to take a “break” from their friendship.

Bravo has yet to announce if the Vanderpump Rules will return for another season.