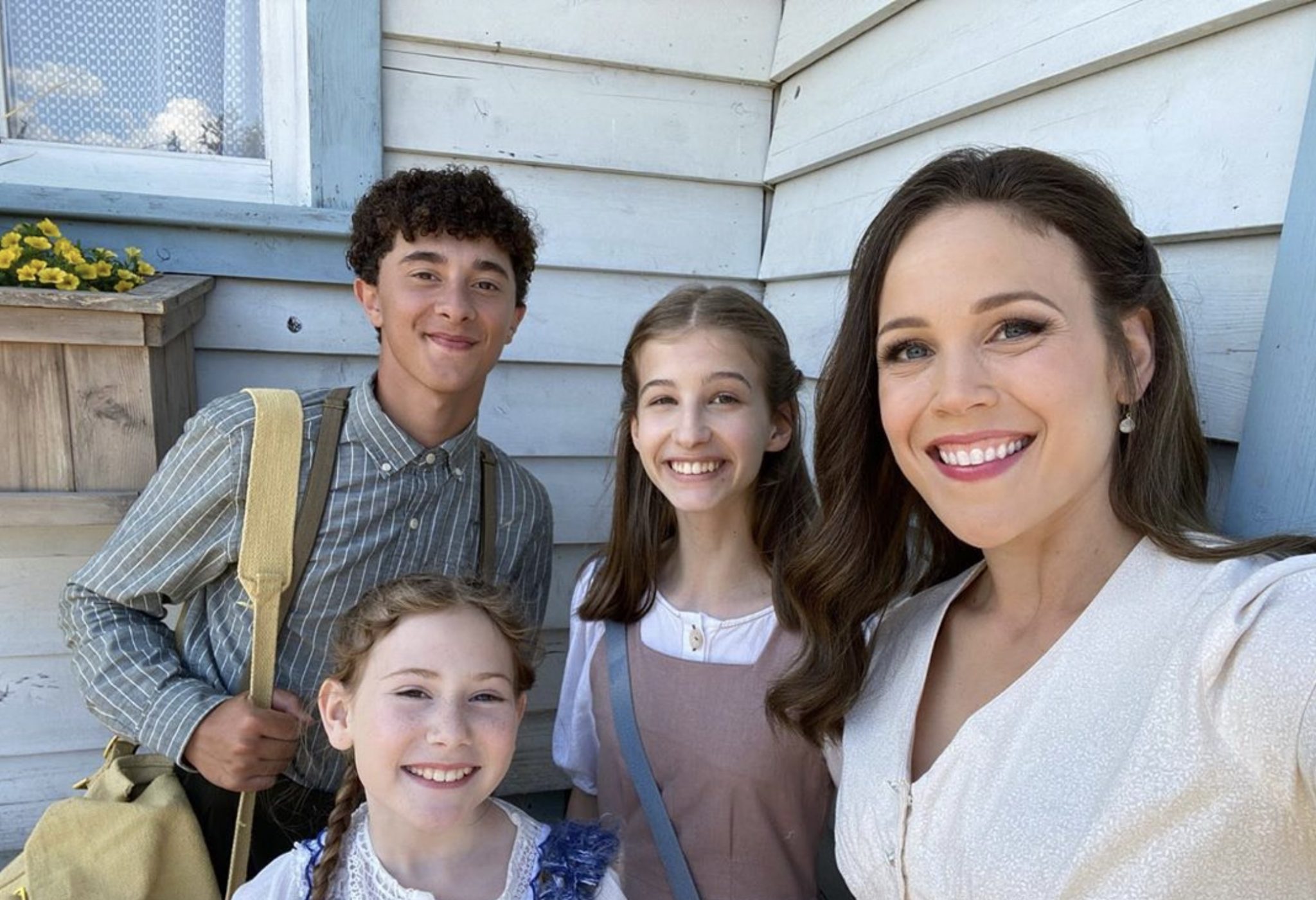 Looking for some normalcy in your everyday life? Erin Krakow just shared a couple of photos from the When Calls The Heart Season 8 set. As the rest of the world deals with the stress of the pandemic, all seems calm and well in Hope City.

When Calls The Heart is headed into its fifth week of production. Filming started just over two weeks ago. Hearties are both lucky and grateful. The cast and crew headed out to Vancouver, at a time that so many shows are still waiting to start production. Right now, it looks as the top Hallmark series is on schedule. They are filming Season 8. In addition, they are filming the annual WCTH Christmas movie. This is a Christmas Day tradition.

Erin Krakow went to Instagram on Friday to share some bts photos. The first shows the smiling actress taking a selfie with some of the kids from the cast. They all look super happy and relaxed.

The second, is a photo taken of Erin, along with the twin brothers Gunnar and Lincoln Taylor. Together, they play baby Jack. Erin is holding some rocks, while the two cuties look at their tv mother. Her caption is appropriately, “Rock stars.”

One thing fans will note is that these are the first bts photos shared that does not have everyone in a mask. But, they have included precautions to keep everyone safe.

When Calls The Heart Cast And Crew Staying Safe

Before Erin Krakow and the rest of the When Calls The Heart cast and crew arrived to set, safety plans were put into place. The star explained to ET’s Deidre Behar the systems that were implemented to ensure safety for cast and crew.

In essence, they are all working in “pods.” What is a pod? Each department is a pod. So each pod needs to stay together and not venture outside of their pod. They cannot interact with the other pods. This is to ensure safety.

Masks are another safety measure. Everyone is to wear a mask. Only the actors who are filming a scene are allowed to be massless. The children obviously are not wearing masks in the photo. Then again, they may all have taken a break from a scene. This would have allowed for a photo and social media opportunity.

What To Expect In Season 8?

What should fans expect to see in When Calls The Heart Season 8? Many assume that this will be the season that Elizabeth chooses between Nathan and Lucas. But, right now, Hallmark is not giving fans any spoilers. They will just have to wait.

When Will When Calls the Heart Season 8 premiere? The network has not shared that detail. But, they have begun to start filming early. Fans should expect the show to return in early 2021.